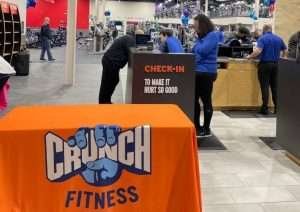 SOUTHGATE — A disorderly man was banned from Crunch Fitness, 14265 Eureka Road, on Aug. 22 after a manager said he was verbally harassing other members at the facility.

The man, who was near the hydro-massage beds, claimed he hadn’t harassed anyone. However, the manager said he wanted him permanently banned from the location. The man was advised, said he understood, and left the location.