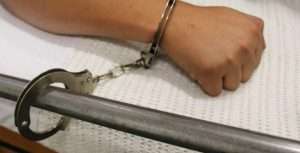 WYANDOTTE — A late-night high-speed vehicle chase followed by a foot pursuit at 2:16 a.m. Aug. 15 near Grove and 23rd streets resulted in the arrest of a 31-year-old New Boston man, who claimed that he had ingested methamphetamines in an attempt to destroy evidence.

The man was taken to a local hospital for treatment, where police officers remained at his side for more than 24 hours. When he was medically cleared, he was transferred to the police station to face criminal charges.

Deputy Police Chief Archie Hamilton said criminals will sometimes make false claims to be taken to the hospital, from which they hope to escape if they are not under constant guard.

“Criminals know that often, law enforcement agencies simply do not have the resources available to sit bedside with a prisoner,” he said. “Our command staff have to balance the severity of the crime and the likelihood of reoffending versus our available resources. However, in order to correct this behavior and reduce this type of manipulation, it is important that we let the person know that this behavior is not a get-out-of-jail-free card.”