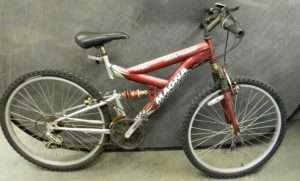 TAYLOR — A maroon Magna brand mountain bike, valued at $300, was stolen Aug. 19 from inside an open, attached garage in the 9400 block of Katherine Street.

The victim, a 58-year-old man, said the theft occurred between 11 a.m., when he returned from a ride, and 5:30 p.m., when he went out to the garage and discovered it missing.

He said the bike had a black basket and two black saddlebags on the rear of the bicycle. There were no nearby surveillance cameras and no suspects.