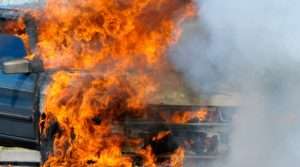 SOUTHGATE — A 2009 Ford vehicle that the owner said had been emitting smoke from under the hood for some time escalated to a fire the morning of Aug. 22 shortly after it was parked in the owner’s driveway in the 14000 block of Mulberry Street.

The residents were evacuated from their house until the responding firefighters extinguished the flames. Arson was not suspected. The vehicle was towed from the location.