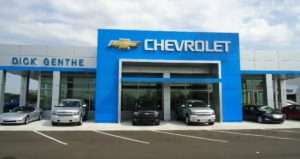 SOUTHGATE — A 2019 Chevy Equinox with significant front-end damage was discovered at 12:06 a.m. Sept. 2 in the parking lot of Dick Genthe Chevrolet, 15600 Eureka Road.

The vehicle’s front bumper was stored in the back seat of the vehicle.

It was not known whether the crash had occurred near the dealership or if the vehicle had been towed there after an incident. The vehicle hood was cool, and from the dew forming on the vehicle, it appeared to have been there for several hours.

A call was made to the registered owner of the vehicle, a Brownstown Township woman, but she did not answer her phone.