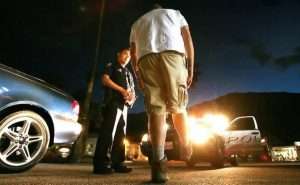 ALLEN PARK — A man was taken into custody for operating under the influence of alcohol at 1:20 a.m. Sept. 11 after a police officer saw him driving 70 mph on Outer Drive near Enterprise Drive, swerving, and making a prohibited turn at a red light onto the Southfield Service Drive.

The man, who admitted to having two shots of liquor an hour earlier, smelled of intoxicants and had watery eyes.

He failed standardized field sobriety tests. A preliminary breath test was administered, and the man had a blood-alcohol content of 0.20, two-and-a-half times the 0.08 limit for legally drunk in Michigan.

The driver was taken into custody and transported to the Allen Park police station, where he was booked and held.