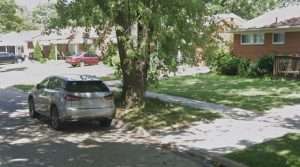 MELVINDALE — A pair of bicyclists and a man on foot were seen on surveillance camera footage stealing items from vehicles Oct. 3 in the 3300 block of McKitrick Street.

The suspects included a white male and a black male, both riding bicycles, and a white male on foot, checking for unlocked vehicles.

The man on foot entering vehicles was about 6 feet tall, wearing a gray hooded sweatshirt, dark jeans and dark-colored winter boots with reflective accents. He was also wearing a white facial mask and appeared to have an ambulatory impediment.

One of their victims said a wallet was stolen from an unlocked Jeep Cherokee, with $10 removed from a wallet, which was discarded on a neighbor’s lawn.

Another victim said the back window of their black 2020 Dodge Charger was shattered, and a small knife was stolen from the vehicle interior.