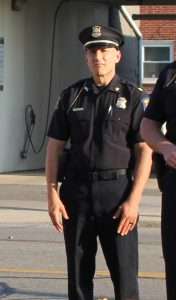 WYANDOTTE — An out-of-state felon with an active state of Michigan felony warrant was arrested at 3:44 a.m. Oct. 7 when a patrol officer saw the man crouched behind a trash bin near a business in the 800 block of Ford Avenue, who, when searched, was found to be in possession of a loaded handgun.

The man, who claimed to be an Ohio resident, could not provide an explanation for his suspicious behavior, refused to provide his name and did not cooperate with the booking process.

The suspect, who was later discovered to be Jeffrey Allen Heim, 35, was charged with firearm possession by a felon, which is a five-year felony; felony firearm, a two-year felony; and being a habitual offender, second notice.

Heim was arraigned on a weekend before 36th District Court Judge Rodney Johnson, and was issued a $1,000, 10 percent bond, which requires a $100 payment for release.

Deputy Police Chief Archie Hamilton was not happy with the low bond amount, but praised the actions of the police officer who spotted and arrested the man, and the work of the Wayne County Prosecutor’s Office.

I think sometimes people are more focused on the rights of the accused rather than focusing on the rights of the victim or potential victims,” he said. “Citizens should not have to worry about being attacked, robbed or assaulted by someone hiding in the dark armed with a loaded firearm.”

Hamilton said the fact that the man was found hiding behind a business trash bin with a loaded firearm is evidence that he presented a risk to the public.

“Why was he hiding and why did he try so hard to stop us from identifying him?” he asked. “What would have happened if this officer did not locate, disarm and arrest this man?”