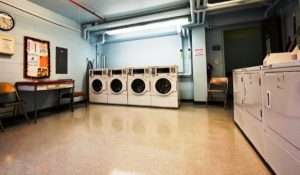 WYANDOTTE — A disabled resident of an apartment building on Biddle Avenue called police at 2:43 a.m. Oct. 15 after he claimed he was assaulted by a person who claims he works with the building maintenance staff, when the men argued over whether the windows in the communal laundry room may be opened.

The complainant, a 62-year-old man who requires an oxygen tank and who has a tracheotomy tube, said he was attempting to do laundry in the basement room, and he was trying to open a window to allow fresh air to enter the room to help him breathe. However, he said a 78-year-old man, who claims he works with the maintenance personnel, insisted that the window remain closed, because the building heat was already on.

The older man shoved the man with the tracheotomy tube, who said he shoved back in self-defense. The victim said he became disconnected from his oxygen tank when the window denier shoved him.

The complainant said surveillance camera footage, which should be available during business hours, likely captured the physical interaction between them.

When a responding police officer tried to explain the victim’s need for fresh air, the older man became confrontational and argumentative.

A sign posted in the laundry room states that windows may be opened while people are in the room using the equipment, as long as they are closed before the person leaves the laundry room.

The victim urged responding officer to contact the office manager during business hours to view the surveillance camera footage to corroborate his story.