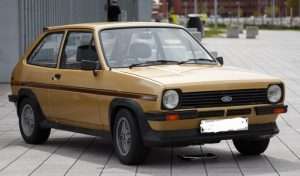 MELVINDALE — A golden Ford Fiesta that had been ticketed five times since July for being illegally parked in a handicap-designated parking space at Gale Gardens Apartments was impounded and towed the morning of Oct. 16 after its sixth citation.

The car, which was covered with leaves, appeared to have been abandoned for some time and was registered to a person with a Detroit address. In addition, the license plate had expired nearly two years ago.