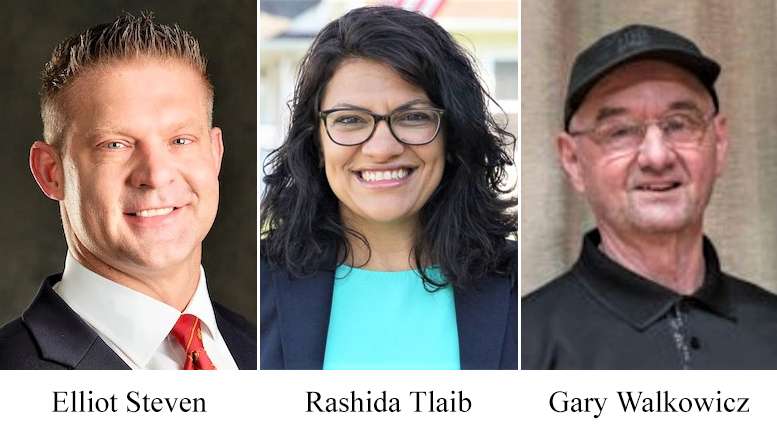 Walkowicz, who did not respond to requests for information, retired from the Ford Motor Co. after 45 years of service, during which he served in many union positions and opposed worker concessions.

1. Please list your education, experience and skills which make you a qualified candidate.

I am a small business owner who was raised in the Detroit area.  I graduated from Roseville High School, then served in the United States Marine Corps.  I have built and operated successful businesses here in Michigan and managed logistical operations in the military.  I understand our economy and how to stop the inflation eating at our wallets and reducing our quality of life.

2. Why are you seeking election and why should people vote for you?

I’m running for Congress because I do not believe radicals like Rashida Tlaib properly represent Michigan.  Her woke agenda does not make our economy better, does not improve education and does not reduce crime.  During her time in Congress, life has gotten worse, not better, as a direct result of her policies.  I’ll change that.  I’ll fight for Michiganders, not Marxists.

3. If elected, what are your top three priorities and how will you address them?

My top 3 priorities are inflation, safety and education.

Inflation is hurting Michigan families.  Everything is more expensive and it is a direct result of the liberal policies implemented in Washington, D.C.  We must stop the runaway spending and get our debt under control.  We must balance our budget to ensure long term prosperity.

Citizens deserve to feel safe in their home, in their community and at work. I’ll fully fund the police, oppose attempts to push no bail for those who break our law and encourage prosecutors to actually prosecute criminals.

Children belong to the parents, not to the state.  We need to get back to the basics of teaching children, not indoctrinating them with radical propaganda in schools.  I’ll stand with parents, always.

1. Please list your education, experience and skills which make you a qualified candidate.

I have served as a U.S. Congressmember from 2019 to the present and as a Michigan State Representative from 2009 to 2015. I have a Bachelor of Arts degree from Wayne State University and a Juris Doctor degree from Cooley Law School.

2. Why are you seeking re-election and why should people vote for you?

Our families are facing issue after issue, and I cannot sit on the sidelines when they deserve a fighter who will stand up for the people against the corporate greed, hate and bigotry that we are seeing in this country. It shouldn’t be this hard for people to thrive in our country.

I have more work to do when it comes to fighting for justice for my residents. Racial, economic, environmental and gender justice issues are still impacting our neighbors. People want a representative who will not sell them out, and that’s exactly why my residents count on someone like me – I don’t take one cent from corporate PACs. People know my stances on issues are rooted in what my constituents want.

3. If re-elected, what are your top three priorities and how will you address them?

Economic Justice: While corporations make record profits, I’ve heard from residents who are struggling to make ends meet. I will continue to fight for higher wages, better jobs and workplace rights and protections. I will also continue fighting for policies that will reduce poverty, especially among children.

Environmental Justice: We have a right to breathe clean air, drink clean water and grow food in clean soil. I have been a leader when it comes to environmental justice in Congress and I will continue to take on this critical work.