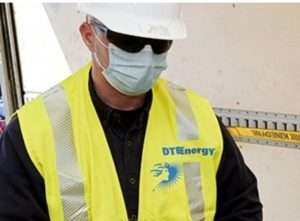 DEARBORN — Two men wearing DTE Energy jackets and hard hats raised the suspicions of a resident living in the 5600 block of Calhoun Street on Oct. 18 when she saw them wandering around her front and side yard.

She said there was no DTE truck nearby and the area was not experiencing any electrical issues. When she phoned DTE, a representative said that there was no work schedule in her area.

Three days later, on Oct. 21, she awoke to a video camera notification at 12:54 a.m., with surveillance camera footage showing one of the same men from earlier inspecting the front of her house.

Copies of all of the surveillance footage was given to the police detective bureau.