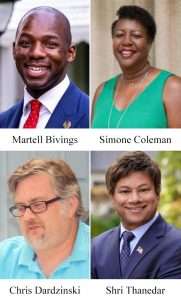 Bivings, a Republican, recently stepped down from his position as a business liaison with the Detroit Economic Growth Corporation, where he worked for the past seven years.

He graduated from Howard University with a bachelor’s degree in Communications.

He said he sees a lot of families and businesses struggling because of inflation and government spending as they try to pay their basic bills and put food on the table.

Bivings said focusing on inflation, the economy and improving the residents’ quality of life is at the forefront of his campaign.

He also wants parents to have a choice with respect to their children’s education, he wants to identify an easier and legal pathway to U.S. citizenship and he intends to protect and fully fund senior programs and benefits.

Coleman, the Working Class Party candidate, spent 32 years working for the Wayne County Office of Public Service as a construction worker, and said she understands and respects labor.

She believes that if corporations get tax breaks and profits, they should provide a living wage and health care for workers.

Coleman wants to bring unity to the labor force and make society a better place for all.

Dardzinski, who represents the U.S. Taxpayers Party, is a graduate of Henry Ford College, where in 1988 he earned an associate’s degree in Liberal Arts. He has also studied architecture, political science and engineering.

He has worked for 31 years in international trade as a senior analyst and operations manager.

Dardzinski served for four years on the Lincoln Park City Council, and volunteered for the past 11 years with the Center for Economic and Social Justice. He has volunteered in the community for the past 46 years, and is the author of five books on economics and politics, and has edited the FRN Newsletter for the past seven years.

Dardzinski wants to protect and preserve the U.S. Constitution, and work on sound economic systems and provide support for those with mental illness.

He wants to bring China before The Hague for COVID-19 deaths around the world.

Dardzinski also wants to implement community-wide disaster plans for each city in the district and provide the funding for critical emergency disaster equipment.

His top three priorities are: 1. Working on the Economic Democracy Act, as proposed by the Center for Economic and Social Justice, at cesj.org. 2. A single-rate tax system; and 3. Restructure the committee/subcommittee process in Congress to eliminate government departments and agencies, as explained at leadership1776.com.

Thanedar, a Democrat, currently represents District 3 in the Michigan House of Representatives.

He said Michigan’s 13th U.S. Congressional District is one of the poorest in the United States, with one-quarter of its residents living below the poverty line, with affordable housing, clean drinking water and quality education out of the reach of many. He said he wants to help more families realize a better quality of life.

Thanedar said he will fight special interests that rig the game for themselves and will bring much-needed federal funding back to Detroit. He said President Joe Biden’s infrastructure bill can improve the lives of people in southeast Michigan by putting people back to work rebuilding roads and replacing unsafe lead pipes used for drinking water.

He said he will fight for social, racial and economic justice.