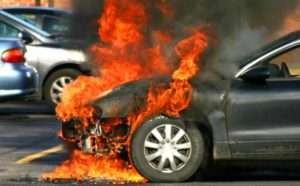 TAYLOR — A suspicious car fire Oct. 25 at the Pond Apartments is being investigated as an arson.

When police officers arrived, firefighters had extinguished the flames in a Ford Fusion, which complainants said may have been deliberated started by a female resident’s boyfriend, who had allegedly made threats earlier.

The accused, who spoke to a police officer by phone, denied the arson accusation, and claimed he had been attacked at a fast-food restaurant earlier by the complainants. Surveillance camera footage did not show him in the vicinity of the car at the apartment complex.

One of the female complainants had an active arrest warrant, and was taken into custody and held.

The burned vehicle was towed and the case was turned over to an arson investigator.