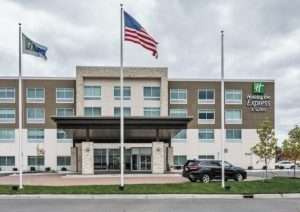 ALLEN PARK — The steering wheel column assembly was stolen at 2:51 a.m. Oct.15 from a rental car parked in the east lot of the Holiday Inn Express, 9000 Enterprise Drive.

Surveillance video shows two people exiting a black two-door car and unsuccessfully attempting to pry open the driver’s side window of the rental car, a 2022 Chevy Malibu. When they failed to do so, they broke the driver’s side rear window to gain access to the Malibu interior.

The person who entered the vehicle wore a red hoody and a face mask. It took them about two minutes to steal the steering column, likely for the air bag assembly. The two people then drove away.