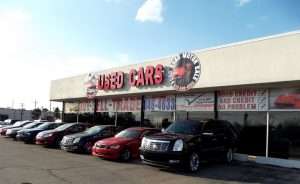 DEARBORN — A surveillance camera notification alerted a business owner to the presence of a trespasser at 10:40 p.m. Nov 5 at Ford Road Motors Sales, 10700 Ford Road.

The victim said camera footage shows an unknown person wearing a brown and yellow Michigan hat and a blue sweatshirt was walking through the used car lot after hours. When police officers arrived to investigate the trespassing, they discovered that a catalytic converter was stolen from underneath a white 2017 Mercedes Benz Sprinter van that the stranger was seen next to on the footage.