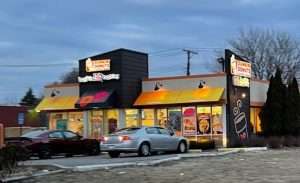 TAYLOR — A 32-year-old Lincoln Park man whose suspicious behavior was reported to police dispatch the afternoon of Nov. 7 was found at Dunkin Donuts, 11111 Telegraph Road, in need of medical treatment and in possession of merchandise shoplifted from the nearby Home Depot.

The police officers told the man, who was sweating profusely and was unsteady on his feet, that they wanted to evaluate his physical and mental health. He said he recently had been discharged from the hospital following a drug overdose and shared his immediate medical challenges. He said he was not under the influence of any controlled substances.

A bag in his possession with a brand-new Milwaukee nail gun, valued at $379, was returned to Home Depot, where loss prevention personnel were able to find surveillance camera footage of the man shoplifting.

He was transported to Beaumont Hospital, Taylor, for evaluation and treatment, where he was cited for larceny and for interfering in a police investigation for refusing initially to provide his correct name to police officers.