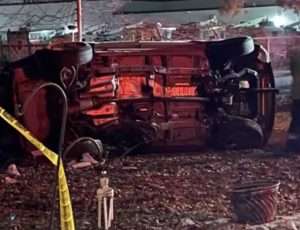 LINCOLN PARK — A 14-year-old girl who took a car for a joyride with friends the night of Nov. 17 was involved in a single vehicle rollover crash that killed her 8-year-old sister, a 15-year-old boy and an 18-year-old man, with a 13-year-old female passenger critically injured.

The driver was not seriously hurt. One person was ejected from the vehicle, while the other four had to be extricated by Lincoln Park, Allen Park and Southgate first responders at the scene, at Cicotte Avenue east of Porter Avenue.

The incident is being investigated by the Downriver Mutual Aid Accident Investigation Task Force and the Lincoln Park police department.