The front passenger side window of a gold 2019 Chevy Equinox was shattered, with a tan Michael Kors purse, containing multiple credit cards and $400 cash, stolen from the front seat.

A black 2020 Jeep Compass also had its front passenger window smashed, with the window pillar damaged by a prying tool. A small blue purse with a moon motif was stolen, along with the victim’s identification, medical marijuana card and credit and debit cards. 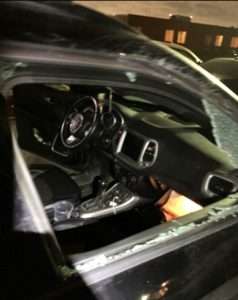 A white 2015 Dodge Journey also had a front passenger window broken and pillar damaged, with a gray and white Michael Kors purse, containing a tan wallet with $400 cash, credit and debit cards and two Social Security cards stolen from the back seat.

A light green 2008 Ford Taurus X also had the front driver’s side window smashed and the window pillar damaged. Two brown bags were taken from the interior, along with credit cards and $10 in cash from the vehicle’s center console.

In addition, two front hubcaps were stolen from a tan 2012 Cadillac SRX.

Rivergate Terrace has no exterior surveillance cameras. There were no witnesses and no suspects.