Confronted by a clear and present fascist threat, the staff of The New York Times rose up to humiliate and punish quislings in its ranks. In a now famous op-ed, Arkansas Sen. Tom Cotton called for federal troops to quell riots and looting, an idea that the Times staff considered worthy of Oswald Mosley or Benito Mussolini. As the Times was disavowing the Cotton piece and preparing to push out or demote its top opinion staffers for publishing it, columnist Michelle Goldberg wrote a response called “Tom Cotton’s Fascist … END_OF_DOCUMENT_TOKEN_TO_BE_REPLACED

Back during the pandemic (remember that?), nearly every corporate advertiser rushed out TV commercials stating, “We’re all in this together.” No, we’re not. Even our name, the United States, is a load of hooey. There’s nothing united about this country. We are instead bristling with divisions: right and left, white and black, pro-Trump and anti-Trump. Obviously, that refers to President Donald Trump, who, as his first defense secretary Jim Mattis said in an extraordinary statement, “is the first president in my lifetime who does … END_OF_DOCUMENT_TOKEN_TO_BE_REPLACED

With new COVID-19 cases in steady decline and most businesses finally set to reopen, it’s time for Gov. Gretchen Whitmer’s emergency powers to end. The governor declared a state of emergency on March 10, giving her extraordinary authority to manage the state through the pandemic. She used that power to basically shut down the state, ending in-person schooling, closing bars, restaurants and stores and forcing all but those businesses deemed essential to shut their doors. The damage to the economy and to individuals has been … END_OF_DOCUMENT_TOKEN_TO_BE_REPLACED

By JARRETT SKORUP The COVID-19 pandemic is an almost unprecedented problem, requiring a massive response from state and federal governments. This included a closing of schools, a shutdown of many parts of the economy, multiple massive spending programs and a host of executive orders pushing through immediate policy changes. This is an emergency and, by law and for good policy reasons, most of what has been done is short-term. (We can’t shut down our schools forever and the state and country cannot afford continued massive … END_OF_DOCUMENT_TOKEN_TO_BE_REPLACED

Restoring order to America’s cities isn’t a complicated proposition. All it requires is resources and determination, and a firm rejection of the longstanding progressive fallacy that an overwhelming police presence is “provocative” and “escalatory” and must be avoided. Out-of-control looting is almost always a failure of municipal resolve or police tactics, and we have seen plenty of just such cowardice and foolishness lately, most notably in Minneapolis, ground zero for this spasm of urban disorder. In a display of sloppy … END_OF_DOCUMENT_TOKEN_TO_BE_REPLACED

By LEE H. HAMILTON Over the last few years, the health of American democracy has come under great scrutiny. Polling routinely shows that Americans are concerned that democratic institutions aren’t working as well as they ought to. Inevitably, this brings up the question of whether we can mend our problems or if the system of representative democracy itself is fundamentally broken. I’m biased. I served as a representative for a good bit of my life, watched the system from the inside with all its faults and all its glories, and … END_OF_DOCUMENT_TOKEN_TO_BE_REPLACED

“No justice, no peace.” Surely we have all heard that chant for decades at various protests ... well, all but the most cloistered in their white privilege. One can debate about the justification for violence in the wake of still another police murder of an African American man, this time George Floyd. But there is, in the final analysis, one major reason to go home and shut down the rioting: the sheer numbers and arsenal that the power structure can rely on for brute force. It is not worth more human sacrifice to make the point … END_OF_DOCUMENT_TOKEN_TO_BE_REPLACED

George Floyd’s death ripped scabs from an array of festering wounds that have infected race relations for 400 years. In most history books, the civil rights era ends with the assassination of the Rev. Martin Luther King Jr. on the balcony of the Lorraine Motel in 1968. Those who haven’t lived the struggle might conclude that the past 52 years have been a celebration of the fruits of King’s dream that race would be irrelevant to success and a nation battered by 400 years of strife had instilled equality in all matters of … END_OF_DOCUMENT_TOKEN_TO_BE_REPLACED 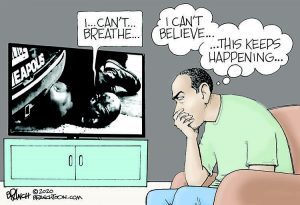 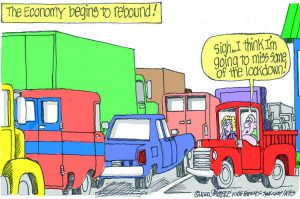