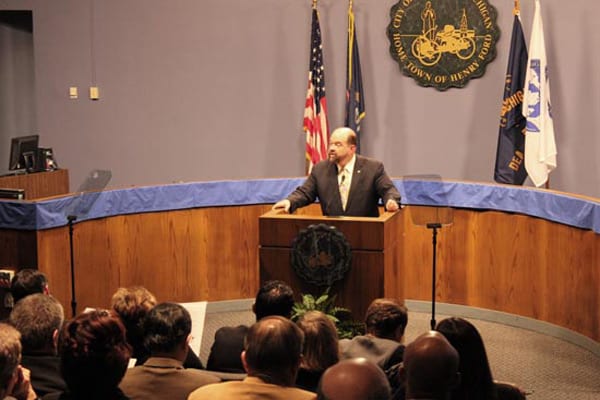 Photo by Leslie Herrick
Dearborn Mayor John O’Reilly Jr. speaks to the public during his annual State of the City address, discussing topics such as education, public funds and economic progress.

O’Reilly discusses issues, resolutions during State of the City

By SHERRI KOLADE
Times-Herald Newspapers
DEARBORN — Mayor John B. O’Reilly Jr. promised to focus on real results when it comes to the Dearborn community during his 2012 State of the City address.

O’Reilly spoke to nearly a full house March 5 in the Council Chambers at City Hall, and said through a straightforward process of measuring progress, identifying priorities, defining goals and demanding real results “our deadline to produce (results) is not five years from now, but now.”

During the address, O’Reilly gave the audience members a review of the city’s economic challenges, recent accomplishments and new initiatives for this year and beyond.

One of the accomplishments O’Reilly discussed was the Performance Dashboard created as part of the recently initiated State’s Economic Vitality Incentive Program.

O’Reilly added the dashboard is a needed tool to measure the city’s efforts and assess how it is doing as an organization.

The categories in the dashboard are good indicators of the city’s financial strength, the power of local economy, and quality of life, he said.

“The dashboard is designed to demonstrate how we progress from year to year toward reaching our goals,” O’Reilly said. “But it is also designed to bolster your trust in us, because you can have confidence we are measuring our progress, and in a very public way.”

He further discussed a few the dashboard category measures starting with fiscal stability.

Even though there are financial challenges as O’Reilly described in his speech, he said the dashboard shows Dearborn is holding their own in that critical area.

“Which is an achievement given the economic forces impacting us, and the news from communities around us,” he said. “It’s also a reflection on the proactive steps we’ve already taken to position Dearborn for the long term.”

Moving on to education, O’Reilly said in Dearborn the college and university enrollment continues to grow now to more than 30,000 students.

“This is another way we are being positively positioned for the future,” he said.

O’Reilly also went to speak on investment in neighborhood amenities and infrastructure, mentioning the city has actively looked for, and have been successful at lowering some of their maintenance costs.

“We continue to make progress with our neighborhood stabilization programs,” he said.

O’Reilly added that this summer the city will be installing 300 new, high-efficiency LED streetlights. He added that this the new train station will be LEED certified through environmental design standards.

“Since July 2010, we’ve increased our residential curbside recycling by 40 percent,” he said.

Near the end of the address, O’Reilly added that Dearborn can face the future with confidence because the community has overcome past challenges and obstacles.

“We are going to keep proving it. Because we are one community, one considerable force standing united in making sure this city remains the best place in the world to make our homes, to raise our families, enjoy our friends, and to follow our dreams,” he said.

Dearborn Public Schools Supt. Brian Whiston, who attended the address, said he is proud to be a part of the Dearborn community.

“We have a mayor who is taking on the challenges head on and by working together we can solve our problems,” Whiston said.

Whiston added that with the city and schools joining forces, partnerships can be continued to save tax payers money.

“By having the city and the schools work togtether whether it is on the Basketball and Books, Parks and Recreation, whether it is sports, senior services… we can work together and … working smarter and by working together is a good thing and I hope the Mayor and I continue on that path,” Whiston said.

Dearborn resident Fouad Ashkr said he attended the address because he wanted to know more about what is going on in Dearborn.

“I have been living here for 40 years. It is my hometown,” he said. “I am really encouraged by the Mayor and what he said. I feel there is going to be a lot of challenges but at the same time a lot of positive things and we are looking toward the future with a better quality of life for our citizens.”