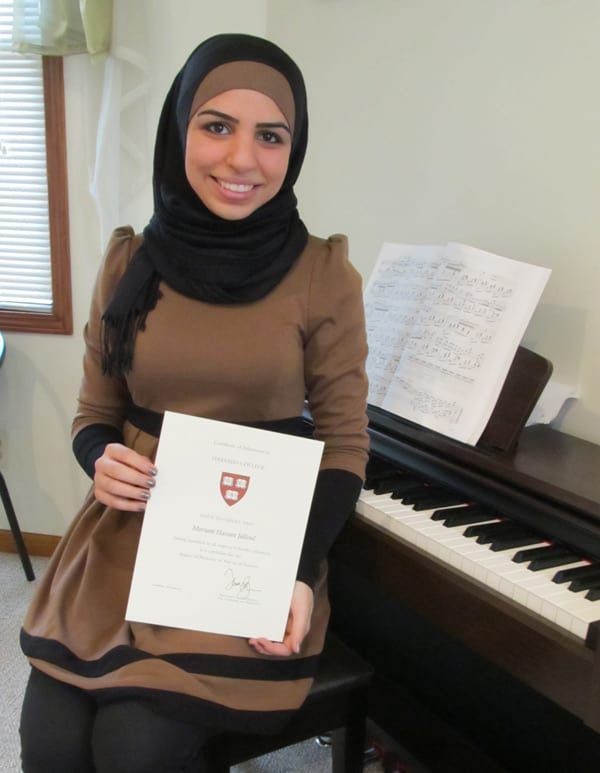 By SUE SUCHYTA
Times-Herald Newspapers
DEARBORN — Fordson High School senior Mariam Jalloul, 17, who said she is excited to be Harvard-bound, is already thinking about returning home.

Jalloul, who received her acceptance letter from Harvard University Dec. 15, will enter the undergraduate class of 2016 in Cambridge, Mass. in September.

“My Dearborn and Fordson community… had a lot to do with shaping who I am,” she said. “And that is why I hope to give back to it when I’m finished.”

Jalloul hopes that after getting a bachelor’s degree from Harvard she will get a master’s degree in public health from either Harvard or the University of Michigan, and then go to medical school to become a physician.

Jalloul will be one of a reported record low of 6.9 percent of applicants selected for the undergraduate class of 2014.

Jalloul, a Lebanese-American and a Muslim, said she is driven by both a passion to pursue the highest education she can and to give back to her community.

One of the factors that drove her academic excellence from the time she was a freshman at Fordson was her hope of earning a full scholarship to the University of Michigan through the Brehm Scholars Program.

Because the Jalloul family valued education, the scholarship and its requirements captured Mariam Jalloul’s attention and encouraged her scholarship.

“My parents came (to America) for the better life,” she said. “I would say… it’s important to pursue the highest education you possibly can; to really reach your utmost potential.”

Jalloul is president of Fordson’s 160-member Key Club, which is sponsored by the Dearborn Outer Drive Kiwanis. Some of their volunteer hours have been earned at Gleaners Food Bank in Detroit and by participating in the American Cancer Society’s Relay for Life in Dearborn.

“Giving back to those less fortunate, knowing that we’re making a difference in their lives… that’s what drives everything I do,” Jalloul said.

Her high school counselor, Nuzmeya Elder, said that Jalloul is one of the most humble students she has ever known, and that she shies away from attention.

“Nothing is embellished about Mariam,” Elder said. “She has the passion for humanitarian service… the interesting thing about her is her unselfish passion to serve others before serving herself.”

Maysam Alie-Bazzi, who was an assistant principal at Fordson before becoming the interim principal at Woodworth Middle School in February, said Jalloul has set a high standard for underclassmen to follow.

“Passion, curiosity, humbleness, and humanitarianism only skim the surface of the many qualities that Mariam offers her school, community and overall society,” he said.

Mona Jalloul said that her daughter is very responsible, reliable and independent.

“Considering her personality, I’m not reluctant to send her (to Harvard),” she said. “We wouldn’t turn down that opportunity for her. We are so proud of her accomplishments… we will miss her… (but) we have to get used to that.”

Jalloul also does service work for the National Honor Society, and through the Students Today Leaders Forever program, a national organization that takes high school and college students around the country to perform service work for communities in need.

Jalloul said her travels with STLF have taken her to many cities, including New York, Chicago, and Washington, D.C. The service work ranged from park clean-ups, school interior painting and visiting with senior citizens in nursing homes.

Jalloul also participated in Generations of Promise. The diversity program, whose members come from different metro Detroit high schools and represent different religious backgrounds and ethnicities, meets every month to discuss racial stereotypes and discrimination, as well as how to tackle injustices and social differences.

She said her participation in the group will help her transition from living in Dearborn, where many residents are Arab-American or Muslim, to a diverse campus like Harvard.

“I’ve met so many people through (Generations of Promise) that I think I’m really comfortable now explaining who I am and learning about other people’s cultures and religions,” Jalloul said.

Jalloul said news of her acceptance to Harvard spread like wildfire through the community. School officials have told her they are not aware of any Fordson graduates who have gone to Harvard at least since the 1960s.

She said that she was relieved that she was congratulated by the Arab-American community despite her breaking with tradition in planning to move out of her parents’ house.

“It was really a big deal for this community,” Jalloul said. “Not many girls move out of their house for college or move out before they’re married, so the fact that someone in our community, especially a girl, got into Harvard, it was made a bigger deal than I think it would have been in any other community.”

She said she is excited about exploring a whole new world at Harvard, and plans to visit in April.

“Having the chance to experience a new world… and really growing from that experience and meeting new people and leaving my comfort zone is going to be the most important thing,” Jalloul said.

She said she would encourage girls now at Fordson to set goals and to believe in their own abilities.

“I’d definitely tell them to go for it – to set a goal and to work hard for it and to not let anyone tell them they can’t do it or not to doubt their own capabilities,” she said. “And just to shoot for their dreams and work hard for them and that they’re definitely attainable.”