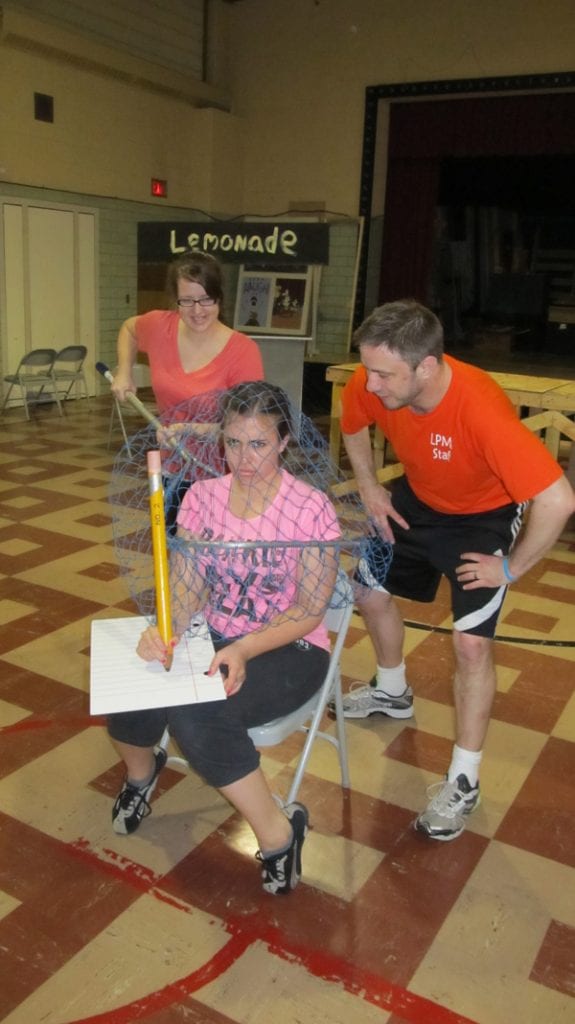 Photo by Sue Suchyta
Sara Mayne (left) of Redford Township as Sally, Emily Gedert of Dearborn as Lucy and Brian Welch of Dearborn as Snoopy rehearse “The Book Report” from the musical “You’re A Good Man, Charlie Brown.” The Dearborn Heights Civic Theatre will present the show for two weekends, April 13 to 21, at the Berwyn Center, 26155 Richardson in Dearborn Heights. For more information go to the DHCT Facebook page or go to www.dhctstage.org.

By SUE SUCHYTA
Theater people are a superstitious lot. They say “break a leg” to wish each other good luck, they avoid mentioning the name of Shakespeare’s Scottish play and they leave a ghost light onstage in an empty theater. They even believe a bad dress rehearsal means a good opening night.

So with the Dearborn Heights Civic Theatre opening their production of “You’re a Good Man, Charlie Brown” on Friday, April 13, the question remains: Will it invoke a round of “good grief” or bring the community theater the success it deserves?

For more information see the DHCT Facebook page or go to www.dhctstage.org.

Both the cast and crew say Charles Schulz’s “Peanuts” characters are enjoyed by children and evoke happy memories for adults.

Emily Gedert of Dearborn, who plays Lucy, said the show appeals to all generations.

“It appeals to the young kids,” Gedert said. “It (has) adults running around and acting like kids, being silly. But it appeals to the older generation, too because it kind of brings back the nostalgia of the Peanuts comic strip.”

Sara Mayne of Redford Township, who plays Sally, added that several generations have watched the Peanuts cartoons on television.

“Everyone kind of watched it growing up,” she said. “All ages – from my parents, to us – we watched it when we were little and now even kids are watching it.”

Brian Welch of Dearborn, who plays Snoopy, said that Schulz used the comic strip as a way to express his philosophy to adults.

“I think… Charles Schulz wrote his cartoons to the older generation based on political views of his life,” Welch said. “But he used kids as his cartoon characters to vocalize those views. So that’s why I think it will appeal to the adults and to the kids.”

Welch, who has played Snoopy before, said he is working with his dog to learn some of the canine characteristics.

“I’m doing the nuzzling with the chin and things like that,” Welch said. “I have actual lines, but we’re playing it as if (the Peanuts characters) don’t hear the lines. All they hear is the ‘row-row-row-ruff’ type stuff, but the audience hears it.”

He said Snoopy is a great comic role.

“‘Suppertime’ is an amazing number,” Welch said. “It’s probably my favorite part of the show … it just brings out everything. He’s such a great character role and has great lines. It’s a wonderful role … playing an animal – you try to grasp that concept and you have people laughing – I do the little ‘dog tail wag’ when he asks for supper and things like that. It’s fun!”

Just as Welch is bringing unique canine touches to his role, director Marc Walentowicz of Garden City said he hopes his staging the show in the round will make their performance of the show different from others he has seen.

“There are the challenges of trying to make it so that everyone feels included in every scene, but I mean there are also no limits,” Walentowicz said. “You can go anywhere, you can do things. I love that you can move set pieces … you can take a dog house and spin it around where you couldn’t do that on a regular stage because you wouldn’t see it once it turned around.”

He said they have figured out how to do the show’s kite flying scene.

“It’s not built yet but we figured out how to do it,” Walentowicz said. “We’ll leave that surprise for the audience.”

He encourages people of all ages to see the show.

“If anything this is truly a show that appeals to 3-year-olds to 100-year-olds,” Walentowicz said. “I mean pretty much everyone has grown up with Peanuts in their lives… it relates to everybody. I would encourage everyone to come – entire families.”

He said of all the characters he identifies the most with Charlie Brown.

“Everybody kind of feels like they’re downtrodden and the weight of the world is on their shoulders like Charlie Brown does,” Walentowicz said. “And that’s by design because Charlie Brown is based on Charles Schulz himself.”

“Sophia’s having a great time being Woodstock,” Tyler said. “She’s having a blast being with this group … Marc’s vision was that Woodstock was just this cameo that you only saw in this little blip (‘Suppertime’).”

She said the group’s been great for her to work with as well, and that everyone helps each other learn the dances.

“I’ve been able to push and do more than I thought I’d be able to do because they’ve just banded together so well,” Tyler said.

She said her favorite number is “Beethoven’s Day.”

“It’s my solo song (with)… Clara (Albright) dressed up as my blanket – that’s our huge dance break in Act I,” he said.

Albright, who plays Peppermint Patty, is a senior at Riverview Community High School.

Mayne said he’s having a lot of fun in a theater group that is new to him.

“It was a little intimidating to be outside of my comfort area,” he said. “But then everybody’s really nice and welcoming and seems to get along well for the most part.”

Others in the cast include Sean Randolph of Canton Township as Pig-Pen, Ron Williams Jr. of Redford Township as Charlie Brown, Dustin Hanson of Westland as Roy, Marissa Campitelle of Inkster as Marcie and Cory Chambliss as Schroeder.

Brian Londrow of Inkster is the musical director, Jerry Kondracuik of Garden City is the producer and Amanda McFarland is the assistant director.

For more information, go to www.dhctstage.org.

The rock musical takes its inspiration from a controversial literature masterpiece. Set in Germany in 1891, it is the story of Wendla and Melchior who meet by chance in the woods and discover a desire unlike anything they’ve ever know. The show contains adult themes.

Angie Kane Ferrante is directing and choreographing the show, with musical direction by Adriane Galea.

In Meredith Willson’s classic story, set in River City, Iowa, Harold Hill, a traveling salesman and con man sells the town on the idea of starting a boys marching band in an attempt to sell them expensive instruments, music and uniforms, then flee the town with no intention of helping them actually start the band.

The town librarian, Marian Paroo, intends to expose Hill as a con man until she sees him bring her shy young brother out of his emotional shell.

The score features Broadway favorites “76 Trombones,” “Til There Was You,” “You Got Trouble,” “Goodnight My Someone” and “The Wells Fargo Wagon.”

The cast includes senior Tim Smith as Harold Hill, and senior Camille Charara and junior Katie Polidori as Marian the librarian. Polidori will perform March 29 and 31 with Charara performing March 30 and April 1.

Greg Viscomi produced and directed the show, with musical direction by Carmelle Atkins and choreography by Jennifer McPherson. Jeff Oshnock will conduct the Dearborn High School orchestra and marching band.

GUILDLING SUMMER SHOW ANNOUNCED
The Players Guild of Dearborn announced that the summer Guildling youth theater production will be “Willy Wonka Jr.” Auditions will be held May 5 and 7, and the show will run July 20 to 29 for two weekends.