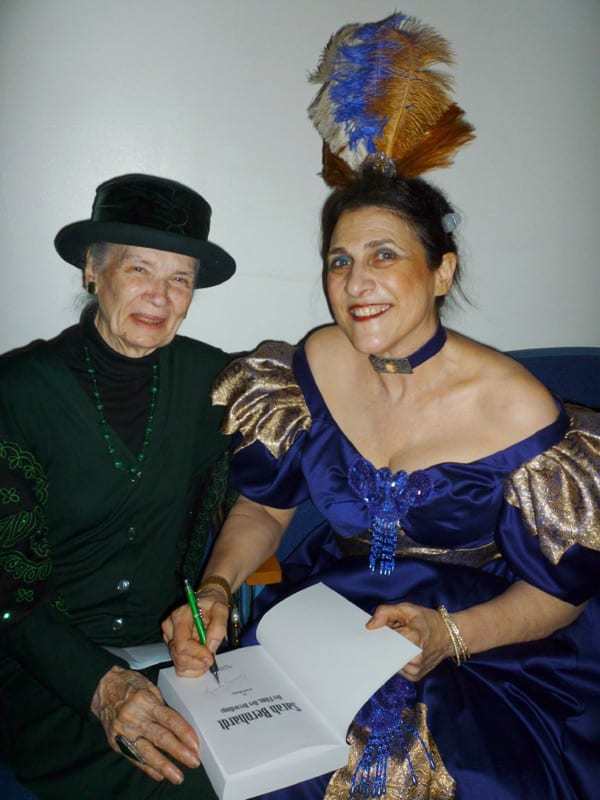 Photo by Evelyn Cairns
Carol Dunitz autographs a copy of her book “Bernhardt on Broadway” for Virginia Pieratt of Southgate after performing as the legendary actress Sarah Bernhardt in the one-woman musical March 17 at the Wyandotte Arts Center. Dunitz, who has been touring Michigan with the musical, is currently in discussions with a major producer to take the production to New York.

By Evelyn Cairns
Portraying the legendary Sarah Bernhardt on the stage of the Wyandotte Arts Center on March 17, Carol Dunitz herself was divine in the one-woman musical “Bernhardt on Broadway,” for which she wrote the music and the script.

Dunitz invited the audience into Bernhardt’s 1890s drawing room to talk and sing about the fascinating and scandalous life of the actress, a courtesan who befriended the famous and became a superstar admired throughout the world as “the divine Sarah.”

Bernhardt, whose mother was a Jewish courtesan, starred in the first full-length silent movie, “Elizabeth the Queen,” which, according Dunitz, enabled Adolph Zukor to co-found what became Paramount Pictures with proceeds from the film’s U.S. distribution.

Among the many famous personalities and celebrities Dunitz talked about during her performance were the Prince of Wales (who became Edward VII, King of England), Sigmund Freud, Ulysses S. Grant, Victor Hugo, Teddy Roosevelt, Cornelius Vanderbilt, Emile Zola and Oscar Wilde.

It was Wilde who dubbed Bernhardt “the divine Sarah.” Mark Twain said about her: “There are five kinds of actresses, bad actresses, fair actresses, good actresses, great actresses . . . and then there is Sarah Bernhardt.”

Bernhardt appeared in more than 50 stage productions and a dozen films before she died at the age of 78 in 1923. Her final film, “The Fortune Teller,” was completed that year with a stand-in whose back was to the audience.

Dunitz, who grew up in Ann Arbor and has a doctorate in speech communication and theater from Wayne State University, is the author of “Bernhardt on Broadway” and several other books. She said she is currently in discussions regarding the staging of the musical in New York.

Entertainment will be provided by the Hers Hymns quartet, soprano Jessica Colvin, the Double Date mixed quartet and guitarist Michael King.

‘Off the Wall’ art is sought
The Downriver Council for the Arts is seeking donations of original art works for an “Off the Wall” mixed-media fine-art show and fundraiser on April 27 at the Wyandotte Art Center, 81 Chestnut.

Proceeds will be used to purchase gallery lighting at the center.

A $20 admission ticket will entitle the ticket holder to select a work of his or her choice “off the wall” and take it home that evening. An additional ticket purchase of $20 will allow the selection of an additional work.

Donations of artwork for the show must be ready to hang with wire and labeling attached. The deadline for donations is 5 p.m. April 25. For additional information, call the DCA at 734-720-0671 or go to www.downriverarts.org/gallery.

MS benefit is planned
A benefit for the purchase of a home for young people with multiple sclerosis and other physical challenges will be held from 5 to 9 p.m. March 31 in Lincoln Park.

The event, to be held at the VFW Hall, 1124 Fort St., will be an all-you-can-eat pasta dinner with dessert. Music for dancing will be provided by disc jockey Marty LaCombe. A silent auction and raffles also are planned.

Scholarship event slated
The Henry Ford Community College Culinary Arts Department will present “Courses IV,” its annual student scholarship dinner, at 6 p.m. March 29 at the Fifty-One O One Restaurant on the college campus. A costal Italian multi-course meal is planned, with beer and wine available for purchase. The cost is $45 ($30 of the price is a tax-deductible donation to the HFCC Hospitality Scholarship Fund). For additional information, call 313-845-9620.