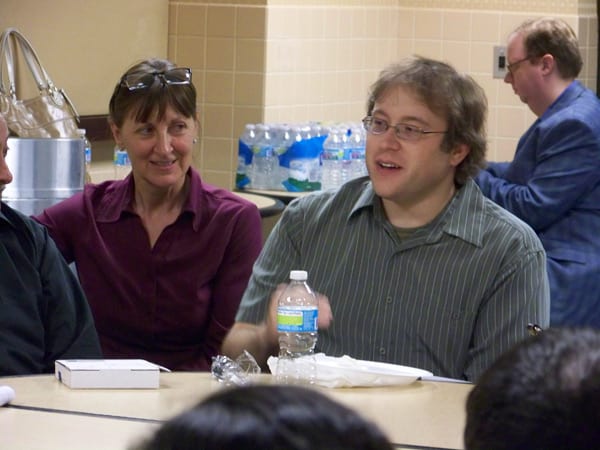 Learning about Dearborn
Photo by Sherri Kolade
Jonathan Kade (right), 30, of Dearborn, spoke about issues during a WDET community conversation discussion revolving around why he lives in Dearborn, culture and politics. Kade said the event was nice to hear other people’s perspectives.

That is what Wayne State University’s public radio station WDET-FM wants to know. By hosting local community conversations throughout metro Detroit, WDET, hopes to get area residents talking about what makes their cities unique.

On March 21, the Arab American National Museum, 13624 Michigan Ave., hosted WDET’s community conversation — round-table discussion style — in which a handful of new and old Dearbonites spoke on topics ranging from reasons they live in Dearborn to culture and the city’s future.

Rob St. Mary, WDET reporter and community engagement specialist, who helps oversee the conversations, said WDET partners with organizations in communities to get people to come out and talk.

“We don’t record so people can feel free to talk,” St. Mary said. “We get ideas on what we can better do in terms of our coverage in communities.”

He added that by building community-based relationships, communities know WDET is interested in covering more than just negative stories.

“As journalists often times we only show up when bad things happen,” St. Mary said. “These sessions help build in an idea that we are apart of this community.”

Jonathan Kade, 30, of Dearborn, attended the event and said it was nice to hear other people’s perspectives.

“I feel among the people I talk to there are a lot of shared goals,” Kade said.

Born in Dearborn, Kade grew up in Detroit and later Grosse Point Woods. As an adult he moved his family to Dearborn.

“It gives me hope we can continue evolving in a healthy direction and get over some of the wounds of the past that many of us are still living with,” Kade said. “I want us to be a forward-thinking community that people my age will want to come to visit and maybe live.”

The community conversations have been held since February 2011, and are making their way to Dearborn Heights, Southfield, two southwest Detroit communities (Delray and Mexican Town) and Grosse Pointe. They have future plans to visit other area cities.

Moderator and WDET radio host Craig Fahle started off the conversation with introductions around the room where residents ranged from business owners, newspaper editors and young professionals.

Fahle asked about how residents and outsiders view Dearborn.

Rasheed Alnozili, The Yemeni American News editor, said he chose to live in Dearborn because of its vast cultures.

“It’s very important for people coming from overseas and choosing to live in Dearborn,” Alnozili said. “It reminds them of back home.”

There are more than 21 home-away-from-home countries represented in Dearborn, Alnozili said. Restaurants and shops that reflect cultures in Egypt, Somalia, Lebanon, Yemin, Iraq, Ireland, Poland and more, he said.

“You can meet a lot of people there that is a good thing,” he said. “That is a blessing. I can’t leave Dearborn.”

During the discussion Alnozili added that culture and religion shouldn’t be a factor in a friendship. Alnozili, an Arab-American Muslim, is friends with a white Christian man.

“When you see ethnicities, Jews, blacks, whites, I don’t see the difference,” Alnozili said. “If we talk about religion we are not going to go anywhere.”

Couple Melissa Poirer, 28 of Dearborn and Andrew Kruk, 28, attended the event and spoke about why they moved to Dearborn from Indiana after the economy picked up.

“We looked at Dearborn, Plymouth, Royal Oak,” Poirer said. Both agreeing that their reason for choosing Dearborn is its proximity to Detroit, walk ability and affordable housing.

“Not everything is a hoity-toity coffee shop,” Poirer said.

As far as the community conversation goes, Poirer thinks everyone is on the same page when it comes to wanting the best for Dearborn.

“But the trick is for those that don’t reside here getting them to see what Dearborn is,” she said.

Kruk added that people shouldn’t pass over living in Dearborn.

“People settling in Royal Oak and Ferndale should give Dearborn a look because Dearborn has everything they want,” he said.

Green Brain Comics Owner Dan Merritt said the city has a lot of things going on and a lot of different opinions but every resident wants the same thing.

“What it really comes down to is we all want a better quality of life,” Merritt said. “We all see a bright future for Michigan.”

For more information about future community conversation events or WDET go to http://www.wdetfm.org/events/