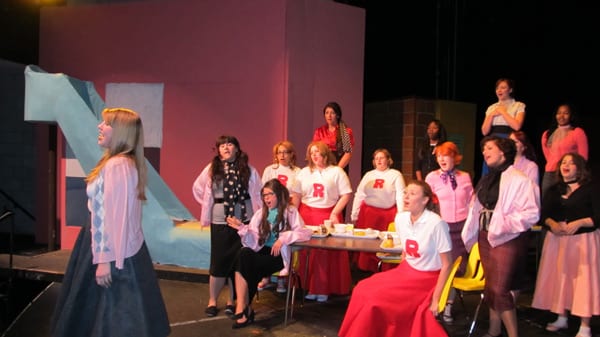 By SUE SUCHYTA
“Grease” is the word as Henry Ford Community College theater students bring the blast from the past to the stage of Adray Auditorium in the MacKenzie Fine Arts Center April 13 to 22 for a two-weekend run.

Directed and costumed by Judith Fletcher, with musical direction by G. Kevin Dewey, the show features the choreography by Barbara Selinger of the Detroit Dance Collective. Gerry Dzuiblinski is the project’s technical director as well as scenic and properties designer.

Fletcher said that the show has many strong singers, and that Dewey encouraged people from his chorale groups to audition. She said the show also has many strong dancers, especially male dancers for the “Greased Lightning” number.

She’s also trying for authenticity in the show’s costuming.

“There are no poodles on my poodle skirts – they really didn’t wear that many poodles,” Fletcher said.

She said they have arranged for the men in the cast to go to a barber who specialize in 1950s haircuts as well.

In addition to Selinger’s choreography, three women in the cast with dance and cheer experience are choreographing some of the side numbers and cheers.

Fletcher said that Dzuiblinski’s set design also has some unique elements. Marty’s bedroom has a high-heel pump bed design, which Fletcher said transforms it into every little girl’s “dream bedroom.”

She said the crew built an actual car shell, sturdy enough to dance on top of for the “Greased Lightning” scene and they have another front end of a car just for the drive-in movie scene.

“The drive-in is going to be interesting because we’re doing an actual drop-down screen with a rear projection of ‘I was a Teenage Werewolf,’” Fletcher said. The 1957 comedy horror film starred Michael Landon in the title role.

She said the large number of vintage props needed for the show have presented a unique challenge.

“Props have been interesting – I have never seen so many props in my life for a show,” Fletcher said. “I didn’t dream it was going to be this complicated, but we have gotten loans of vintage items for the different scenes and we have real food, and we have a surprise hopefully at the end – I’m not going to reveal it, but if it works out it should be really cool.”

The challenging props have included a View-Master, a device for viewing 3-D images on a paper disc, fake cigarettes with authentic looking packs, reproductions of fan magazines as well as movie star photos of celebrities mentioned during the show, such as Elvis Presley, Ricky Nelson, Sal Mineo and Troy Donohue.

She also said that they are highlighting local brands like Better Made Potato Chips, Faygo and Vernors.

Fletcher said they are setting their production of “Grease” in the Detroit area.

“We have the Dream Cruise, we have this history of cruisers and the cars and the drive-ins,” Fletcher said. “That whole era is still very prominent in people’s minds.”

Shauna Rae Hazime, who plays Sandy, said she is drawing on the era to help her develop her character.

“I see Sandy personally as me when I was 16, before I grew up and saw the world for actually what it was and the world kind of corrupted as it does for everyone,” Hazime said. “But just going back to a more simple time for me and being under the protection of my parents and not having to do so many things on my own.”

Raymond Filipek, who plays Danny Zuko, said that people may be surprised that the stage production has many elements true to the era, but it does not mirror the movie.

“A lot of people, when they think of ‘Grease’ they think of the movie ‘Grease’ and that’s not what we’re doing,” Fillipek said. “We’re doing the original stage production, which is different — it’s almost a different show, with the same undertones and aspects. So when people come see the show they’re going to see a whole new version ‘Grease’ and it’s going to be one that’s just as good, just as great, if not better, and people are going to be blown away.”

In addition to seeing a different version of ‘Grease,’ Dzuiblinski said that audiences will see a mixture of realism and impressionism in the design. He said that since the car, ‘Greased Lightning’ wasn’t real, the crew decided to exaggerate some of the other details.

He added that they also have some new microphones to enhance the sound of both the soloists and chorus.

The bedroom is Marty’s and is used during the girls’ sleepover scene.

Dzuiblinski said he wanted to do some exaggeration in the set because he couldn’t do everything realistically. Since they couldn’t get a car on stage they decided to do some other stylized moments that exaggerated the mood of particular scenes.

He said for “Beauty School Drop-Out” they fly in some clouds and the vocalist is “up in the heavens.”

“We’ve tried to put a few little comic touches into the scenery without being too overdone,” Dzuiblinski said. “So we hope the audience enjoys them.”

Judo Mako, who plays Frenchie, said the show is also unique because of the youthful energy of their cast.

“I really feel that we captured the feeling of being teenagers and being confused and this whole mess, and friendships and coming back together and having fights,” Mako said.

Dewey agreed that the show captures a youthful energy and has a rock and roll feel that make it an audience favorite. He said this is one of the most talented casts he has had to work with at HFCC and one of the largest auditions that he has ever experienced here.

“A lot of people know ‘Grease’ already because it’s rock ’n’ roll; it’s fun,” Dewey said. “It’s a bunch of kids having a good time on stage is what it really is. So if you like seeing youthful exuberance and you like ’50s rock ’n’ roll then you’re all set.”

Also in the cast are Detroit residents VicAngelo Offutt, 20, as Eugene; Marcellus Hogan, 22, as Roger; London Johnson, 29, as Johnny Casino; and Drake Highgate, 20, and Khadijah Carr, 18, in the chorus.

Allen Park residents in the cast include Randall Nicholls, 19, as Teen Angel and Andrea Wells-Preister, 19, in the chorus.

Redford Township residents in the show include Courtney Butterfield, 22, as Miss Lynch, and Brent Baldridge Jr., 21, Bowen Underwood, 22, and Ellen Neiman, 20, in the chorus.

Others in the cast include Megan Oliver, 20, of Royal Oak as Marty; Joey Kulza, 20, of Brownstown Township as Doody; Corey Allen, 19, of Livonia as Kenickie; Raymond Filipek, 22, of St. Clair Shores as Danny Zuko; Tim Pollack, 20, of Wyandotte as Vince Fontaine; and Danielle Addington, 37, as Cha-Cha.

Other chorus members include Miekyle Turner, 21, of Romulus; Maurice Whitsett, 21, of Inkster; LaToya Letman, 22, of Southfield; and Brittany Lowrey, 20, of Westland.