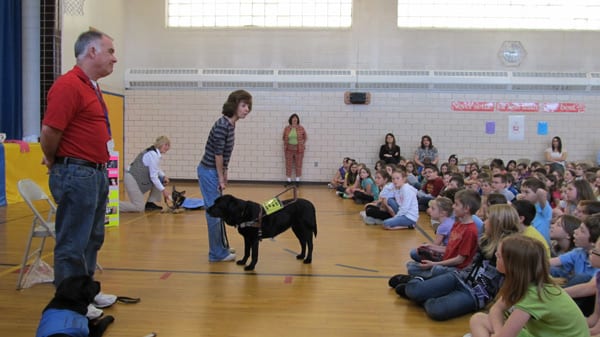 Photo by Sue Suchyta
Patrick Clemens (left), of Allen Park, a Leader Dogs for the Blind team member, works with Wade, a 6-month old black Labrador retriever in-training, while Becky Wynn of Denver, a retired teacher who once taught at Memorial Elementary in Riverview, works with Juno, a 3-month-old German shepherd in-training, and Patrick Clemens’ wife, Donna Clemens, who is legally blind, explains how she works with 10-year-old Katie, a black Labrador retriever Leader Dog. The three explained Leader Dogs for the Blind training and expectations March 21 for the third-, fourth- and fifth-graders at Memorial.

By SUE SUCHYTA
Times-Herald Newspapers
RIVERVIEW – Students at Memorial Elementary School were surprised to learn that sometimes it’s good to be disobedient – at least for service animals.

“They have to stop (blind) people because they can get hurt,” Anna, 9, a student in Susan Keathley’s fourth grade class, said.

Third, fourth and fifth grade students at Riverview’s Memorial Elementary School, 13425 Colvin, learned March 21 how Leader Dogs for the Blind are trained and how they help visually impaired people become more independent from volunteer dog trainers Becky Wynn and Patrick Clemens, and from his wife, Donna Clemens, who is legally blind and a leader dog client.

Leader Dogs for the Blind, a non-profit organization in Rochester Hills, was founded by three Detroit-area Lion Club members in 1939 and offers free guide dogs and training to blind and visually impaired adults to provide independence, mobility and an improved quality of life.

Wynn said Juno is the third puppy she has trained and that a puppy will be with her for almost 12 months.

As a volunteer puppy raiser, Wynn gets them when they are seven weeks old — that is when they “start school.”

Wynn said the puppy they are training goes everywhere with them – to school, grocery stores, concerts, church and restaurants.

When a dog is 14 months old they will start their special training at the Leader Dog facility in Rochester Hills to become a leader dog.

Wynn said the initial training lasts 6 to 8 months before they decide if an animal is leader dog material.

Wynn said they teach the dog obedience: to sit down, follow, or lead somebody. Another phase of their formal training is called disobedience.

“Did you know they have to learn not to obey, too?” Wynn said. “These special dogs have to learn how to think and say to themselves ‘I can’t take my blind person out into the street’ because it’s not safe. So these dogs have to think.”

Fourth grader Destiny, 9, said she likes how the dogs can stop people from getting hurt.

Her classmate Samantha, 9, said she was amazed by how the dogs help the people get around.

Donna Clemens told the students how her dog Katie tried to prevent her from walking off the end of a dock at a lake in northern Michigan when they were first paired up.

“That was my fault,” she said. “I should have listened to the dog.”

Fourth grader Hunter, 9, said what stood out the most following the presentation was how each dog becomes a part of the person’s life.

“I learned that the dogs are so special to the people and they care about them,” he said.

“The thing that amazed me was that if the dogs didn’t make it they had a career change,” Javem said.

Donna Clemens said Katie is her second leader dog. Her first, a black lab, retired after 14 years of service and then she got Katie in 2003. She got Katie when she 15 months old. She’s ten years old now.

“She works great for me,” Donna Clemens said. “She gives me my independence. We walk to the mailbox, we walk to the hairdresser, and you know what? The most important thing: she keeps me very safe.”