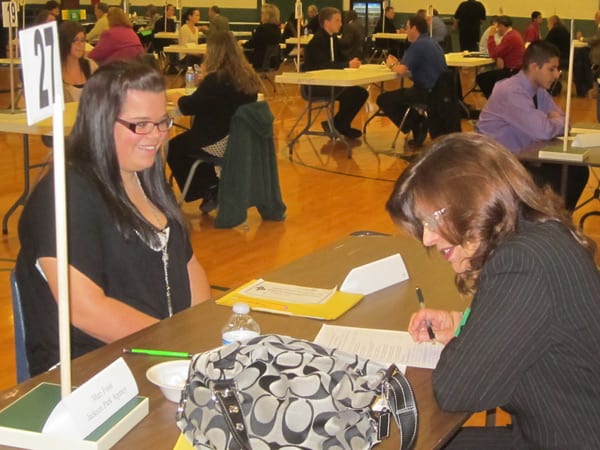 By Andrea Poteet
ALLEN PARK – It was job interview day and I nervously scanned the room. Shirts were ironed, answers were rehearsed and resumes were in hands. My stomach lurched and sweat welled in my palms. Interviews are always unnerving, but this time should be different, I reasoned.

This time I wouldn’t be answering the questions, I would be asking them.

I’d been invited to participate in Allen Park High School’s fifth annual Professional Interview Day, in which juniors attend mock job interviews with representatives from various fields, with a focus on sharpening interview skills more than matching a student with an expert in his or her chosen career. The school’s gymnasium was filled with social workers, health care professionals, former teachers and even a current city councilman.

As a journalist, I make my living asking questions. I’ve interviewed city officials, high-powered executives, minor celebrities and everyday people. But when it came to a job interview, I’ve always been the one answering questions. I’d never before been on the other side of the desk.

Participants were handed a packet of sample questions and a rubric in which to track each student’s professionalism and interview skills.

As my first 10-minute interview began, I was a bundle of nerves. What if I messed up? Would I dampen the experience for the student? Would I unknowingly turn a prospective writer away from my field? What did I even know about this?

But after the interview, I spoke with Principal Janet Wasko, who let me know that most of the students had never before had a job interview, and were more flustered than I could ever be.

“It’s really uplifting to them,” Wasko told me. “They’re so well prepared. They come in so nervous, and when they leave, they go, ‘That wasn’t so bad.’”

And as more and more students sat down at my table, I saw she was right. With each interview they loosened up, and so did I.

I also got to meet some incredibly well-spoken, driven teens. Junior Bailey Caulfield told me she was torn between potential careers in teaching, writing or the military and told me the interview experience was similar to real-life interviews she had had for after-school jobs.

Caulfield, who works at a pizza place, runs track and field and volunteers with Allen Park Bulldogs and the Police Department’s Safety Town program, said she was most nervous about having to “sell” her positive attributes, a trait I thought was one of her strongest.

“I don’t like to toot my own horn,” Caulfield said. “That was probably the hardest part for me. But I don’t just do these things for no reason.”

After that, I calmed down and started to have a lot of fun. I veered from the pre-supplied questions and asked some of my own gleaned from years of interviewing for a variety of jobs. I wanted to know about interests, role models, and the best advice each student ever received.

I met kids who wanted to be in the Armed Forces, work with computers, and turn their love of art into a career. I was impressed with their drive and maturity and how prepared they were for what for many was their first experience with a job interview.

Participant Jennifer Kibby, executive director of the city’s Downtown Development Authority, was likewise impressed with the students she spoke to.

“They’re much more savvy about this whole process than I was at that age,” she said. “They can discuss their experience and how it applies to their position. Even in 11th grade, they have goals and know how they are going to get there.”

And when I asked one of those students about what they learned while preparing a resume and reviewing potential questions, he inadvertently gave me the best advice I’d gotten all day: to relax and enjoy myself.

“I learned not to be completely uptight,” Ryan Trifoni told me after discussing his potential career in computer animation. “It’s just an average conversation. Not every word you say is going to determine whether you get the job or not.”