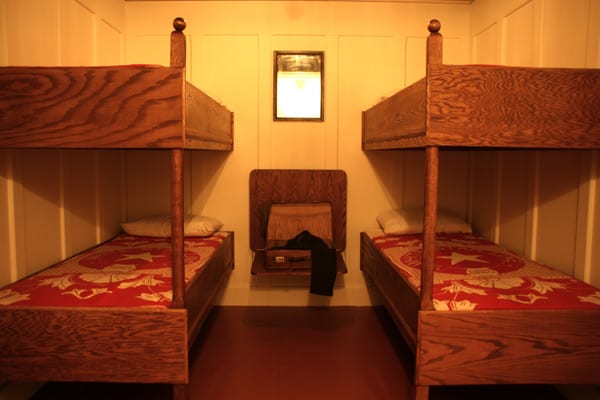 Photos Courtesy of Titanic The Artifact Exhibition
The remake of Titanic’s third class cabin is displayed in one of the Henry Ford Museums exhibits, the Titanic exhibition, slated for March 31 through September 30 at the Museum.

By SHERRI KOLADE
Times Herald Newspapers
DEARBORN — The century-old story of a doomed ship’s collision with an iceberg that killed more than 1,500 people is being retold within the walls of the Henry Ford Museum.

The museum is now featuring Titanic: The Artifact Exhibition, a 10,000 square-foot traveling exhibit through September 30.

The extensive exhibit takes visitors back not to only the fateful day of April 14, 1912 — when the world’s largest ship struck an iceberg- but the making of the ship in Belfast, Ireland and the lives of its passengers. It also showcases replicas of the ship and salvaged artifacts near the ship’s wreckage in the North Atlantic Ocean.

The exhibit features more than 300 artifacts — 250 of which have never been displayed in Michigan, Tom Varitek, program manager at the Museum, said.

“What they do is provide an emotional context to these tremendous events that made history,” Varitek said. “Having such a famous exhibit about such a famous event in its 100th anniversary is a great opportunity for us,” he said.

Varitek added that there is link to the Museum’s interest in hosting the exhibit because Henry Ford collected seemingly everyday items that had no value to others. The exhibit showcases seemingly mundane items turned into artifacts. 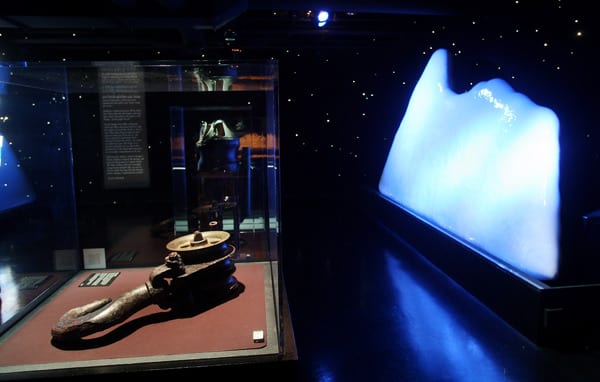 A recreation of the iceberg that was struck by the Titanic ship is on display at The Henry Ford Museum. The replica is cold to the touch.

The items collected by Ford provide context for some extraordinary events, Varitek said. The Titanic exhibit does the same thing by providing an emotional context to the events that made history, he said.

Varitek added that the exhibit’s strength is its emotional pull and its focus on the lives of the passengers.

“The realness and the true tragedy of the event can get lost in dusty pages,” he said. “(But) when you see things that actually belonged to people on board and you go through the emotional journey at the exhibit, it brings it home. That is what we do here.”

The exhibit occupies double the space that other traveling exhibits normally do.

“We knew this was going to be big and we wanted to get as big an expression of this exhibit that we could get here,” he said.

The exhibit includes several recreated rooms such as the first-class hallway leading into passengers’ cabins. It also includes first and third-class bedroom displays that showcase the economic and social differences of the passengers in first, second and third class.

Another recreation is a full-scale version of the lavish, grand staircase on the Titanic. Visitors can have their pictures taken on the staircase and purchase the photo at the Titanic store at the end of the tour, along with another photo-op at the beginning of the tour on a recreation of the ship’s bow.

Visitors are given an identification card and boarding pass, where they can learn about one passenger’s life on the ship. By the end of the tour, the visitors find out if their passenger survived or not.

The exhibit has tours every 15 minutes, with a timed ticket feature. Visitors can enter the exhibit through a “now boarding” entrance.

Near the end of the tour, visitors can view the Memorial room, where the exhibit focuses on individual stories of who was on the ship.

“What is different about this (exhibit) is a lot of the other (people’s belongings) is general,” Varitek said. “We did not know who it belonged to.” He added the personal belongings in the Memorial room were attributable to someone because their belongings were preserved inside their suitcase or other preservation methods.

The Memorial room also tells the story of passengers on board who had connections to Michigan.

Varitek said he anticipates thousands of people to attend.

“We anticipate it to be one of the most popular traveling exhibits we have ever had,” he said.

The traveling exhibit is provided by Premier Exhibitions Inc., a major provider of museum touring exhibitions throughout the world, according to their website www.prxi.com.