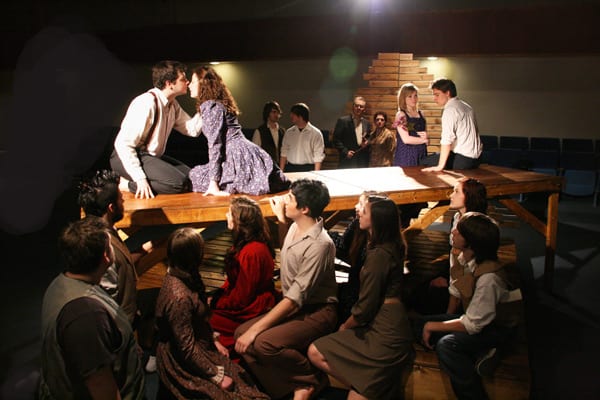 By SUE SUCHYTA
“Spring Awakening” has come to Wyandotte.The AKT Theatre Project will bring the winner of eight Tony Awards, including best musical, to the stage of the Wyandotte Arts Center for a three-weekend run April 13 to 28.

The show features music by Duncan Sheik and lyrics by Steven Sater.

Set in late-19th century Germany, the rock musical tells the story of teens discovering their emerging sexuality amid the stress factors in their lives.

The original non-musical play, written in Germany in 1892 by Frank Wedekind, was originally banned in Germany because of its candid portrayal of abortion, homosexuality, rape, child abuse and suicide.

Directed, produced and choreographed by Angie Kane Ferrante, 27, of Wyandotte, the show features the musical direction of Adriane Galea, 27, of Wyandotte and the lighting design and technical advice of Harley Miah.

Company founder and show director Kane said the show is the ninth she’s directed for the AKT Theatre Project. She said the rock musical is not a traditional piece of theater.

“The music is hauntingly beautiful,” Ferrante said. “The story line is – valid – is the word that keeps coming up, because there are so many things that happen in the story that people — if they haven’t personally experienced them — they know about them or they know somebody who did experience them and therefore this makes sense to people.”

She said she isn’t doing the show — which contains sexuality and mature themes — for the sake of shocking people.

“I think there’s absolutely no reason to do something to intentionally shock people,” Ferrante said. “I think what is so different about this play – because some of the themes that are in this play are in tons of stories, plays, but … these things happen in front of you in this show and that’s what makes it different. But (the cast) … understands that the message is more important than censorship.”

Shaylyn Kiely, 21, of Wyandotte, who plays Ilse, a girl who leaves an abusive home and eventually joins an artists’ colony, said that the moving show addresses subjects rarely addressed in a stage play.

“It deals with a lot of real issues that are typically considered taboo but… more light is being shed on them,” Kiely said. “Like teenage suicide and puberty and sex and pregnancy and all that stuff. But the music itself is beautiful on its own – if I had never seen the show I would love the music.”

She added that even though the show revolves around teens, she thinks that people of any age can identify with the characters and what they are going through.

The two older adults in the show, Lindel Salow, 50, of Dearborn, who plays nine different characters and Jean Pilon, 56, of Wyandotte, who plays five roles, said their characters are played from the perspective of how the teen characters in the show see them.

Both said they hope that audiences take away the message that children need to be heard, believed and respected.

Salow said that in today’s society we tend to treat our children as friends instead of as children and being a parent.

“In turn we also expect them to think … like an adult – the same way we do,” Salow said. “And that isn’t the case.”

Pilon added that conversely in the era the play is set, children were seen and not heard.

She added that the company is very talented.

“They’re amazingly talented,” Pilon said. “The things that they put together, just the past few weeks, just blows my mind and I’ve watched Angie and a lot of these kids work many, many shows before, but I’m just so impressed.”

She added that there is also some haunting, beautiful music that is played on all stringed instruments.

Lisa Youngs, 21, of Wyandotte plays Wendla, an innocent girl whose mother will not tell her how babies are conceived, which leads to unexpected consequences when Wendla allows herself be seduced by Melchior.

Youngs said in addition to the hauntingly beautiful music, the show has something for everyone.

“I think that whoever you are, you can relate to the show on some level if you come in with an open mind,” Youngs said. “I think it’s absolutely beautiful, like the instrumentation is beautiful, the music is beautiful, the scenes are beautiful, and it’s also truthful, and that’s what theater is about – it’s about telling the truth, and it confronts things that we don’t talk about in our everyday lives.

Jack Hundley, 23, of Wyandotte, who plays Wendla’s love interest Melchior, a headstrong, handsome and charismatic boy, said he has also told people who usually see him in shows that this one is more intense and more adult in its subject matter, but it is something that they should see.

“It’s so different, it’s controversial,” Hundley said. “I am one to believe that things that are controversial tend to be things that people don’t want to talk about, that they’re hushed up for a reason, and why not be open-minded?”

Peter Giessl, 24, of Rochester Hills plays Moritz, Melchior’s intense and nervous best friend. Giessl said Moritz is sleep-deprived and depressed as his world crumbles around him, and he fails out of school, which his parents feel is the worst thing he could have done.

Giessl said he hasn’t seen many plays that are as candid about the issues facing adolescents as “Spring Awakening.”

“I haven’t seen much theater that just relates to young kids in such a way that it’s relatable and also kind of opens your eyes to the way kids are being treated and how kids are still being treated,” Giessl said. “They’re people too and they have wants and things … when they’re not heard it’s a really devastating thing; it can be really tragic.”

Others in the cast include Jason Glenn, 19, of Wyandotte as Ernst; Lincoln Park residents Sarah Mikota, 16, as Martha and Hope Morawa, 20, as Anna; and Sebastian Adams, 21, of Detroit as Georg.

“I hope people come out and find the joy in (“Spring Awakening”) that we did while we were doing it,” Ferrante said.