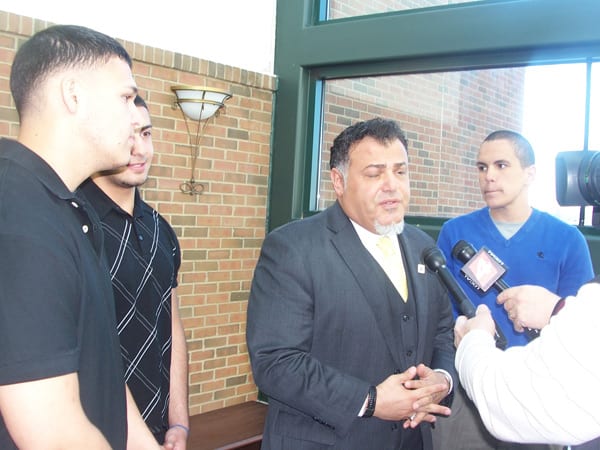 Bajjey, a senior, stood among his peers, family and community members outside of the courtroom, saying the judge’s ruling was a just one.

“It is a big weight off of our shoulders,” Bajjey said. “I am very relieved. It has been a stressful few months and justice has been served and we now have nothing to worry about.”

Bajjey – who plans to go to college in the fall — added that now he doesn’t have to worry about his future being affected negatively.

“(The charges) won’t get in the way of college, our jobs or anything like that,” he said. “And I can keep my scholarship.”

Nabih Ayad, attorney for the boys, said the judge’s decision was not only appropriate but courageous.

“The judge looked in to this matter and realized with clear conscience what is happening here is just outrageous,” Ayad said. “By his decision today he restored the kids’, their families’ and this communities’ belief in the justice system.”

Ayad added that in a post-9/11 era, residents in Dearborn, the largest Arab American community outside of the Middle East, were up in arms over the charges, and that the boys’ ethnicity was motivation for them.

“I think there is a racial animosity behind these actual charges and initially the Dearborn Heights police wanted to bring felony charges against these boys,” he said. “It didn’t rise to the level of criminal culpability.”

After the October fight, the players were suspended from school for two days and charged in December 2011. They were arraigned Jan. 13 before Plawecki.

Not everyone was happy with the judge’s ruling.

Lutheran High School students Jon Lambart, 15, and Brad Hura, 16, said the judge did not review all of the necessary evidence.

“I feel upset, saddened,” Lambart said about the ruling. “The violence was going on all throughout the game, not just the last 10 seconds of the fourth quarter. It was at the very beginning.”

Hura said there were scratches on other players who were injured at the hand of Star football players.

“We just came to play a game,” Hura said.

“As the judge stated in his facts, ‘football is a contact sport,’” he said. “And even when I played football we had incidents similar to this but there were no criminal charges brought against anyone.”