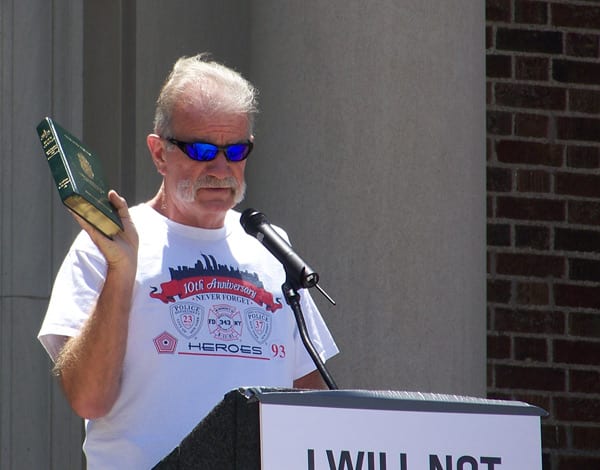 Times-Herald file photo
The Rev. Terry Jones, shown speaking in front of Dearborn City Hall in June 2011, was scheduled to demonstrate in front of the Islamic Center of America Saturday.

By SHERRI KOLADE
Times-Herald Newspapers
DEARBORN — The Rev. Terry Jones, famous for threatening to burn the Quran, has won a lawsuit against the city.

The lawsuit filed on April 2, stemmed from the city’s hold-harmless agreement that would relieve the city from any legal responsibilities if anything happened during Jones’ speech scheduled for April 7.

Jones was initially required to sign the agreement to receive a permit to speak against the beliefs of Islam in front of the Islamic Center of America.

Jones said that city representatives told him other speakers who came to town did not have to sign such an agreement.

“We asked (the city) to produce examples and documents,” Jones said. “They sent us copies but they were not as intensive or detailed like the agreement they sent us.”

Jones said he thinks Dearborn singled his group out asking them to “pay for their amendment rights.”

City Spokesperson Mary Laundroche said Jones could possibly transform the hold harmless agreement into wording he was more comfortable with.

“(We) told him and his organization they are welcome to provide the language for review and develop a language they are comfortable with,” she said, adding that because Jones wanted to speak in front of the Islamic Center of America, it was important for him to sign the agreement, because that area is not meant for speaking.

“It is designed as buffer zone for Ford Road,” Laundroche said. “It is not a park, it is not meant for people to use.”

Jones has been to Dearborn three times before, and was once arrested here for declining to pay a $1 peace bond.

“We are definitely happy about the decision,” Jones said about winning the lawsuit. “We feel it is a victory for freedom of speech.”