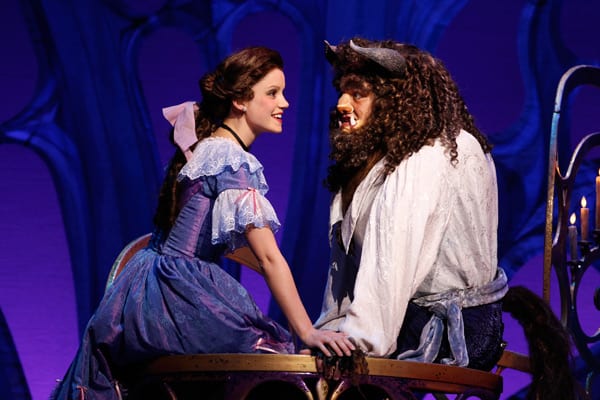 Photo by Joan Marcus
The Disney Broadway musical “Beauty and the Beast,” with Emily Behny (left) as Belle and Dane Agostinis as the Beast, runs through April 22 at the Fisher Theater in Detroit. For tickets or more information call 800-982-2787 or go to www.ticketmaster.com or www.broadwayindetroit.com.

By SUE SUCHYTA
The post-spring break musical theater season is in full swing. Venues that delayed show openings until after the spring holidays are now making up for lost time.

The Dearborn Heights Civic Theatre will offer “You’re a Good Man, Charlie Brown” Friday to Sunday at the Berwyn Center. Go to www.dhctstage.org for more information.

“Grease” is the word as Henry Ford Community College theater students bring the blast from the past to the stage of Adray Auditorium in the MacKenzie Fine Arts Center through Sunday with 8 p.m. performances on Friday and Saturday and a 2 p.m. Sunday matinee. For more information call 313-845-9817 or go to theatre.hfcc.edu.

The Disney Broadway musical “Beauty and the Beast,” runs through Sunday at the Fisher Theater in Detroit. For tickets or more information call 800-982-2787 or go to www.ticketmaster.com or www.broadwayindetroit.com.

‘GREASE’ CAST FILLS HFCC STAGE WITH ENERGY AND ENTHUSIASM
Henry Ford Community College continues a run of “Grease” through Sunday with 8 p.m. performances on Friday and Saturday and a 2 p.m. Sunday matinee.

Highlights of the 29-member cast include strong male dancers in the “Greased Lightning” number, a fun-to-watch high school dance with the full ensemble, and strong vocals in the production numbers.

Shauna Rae Hazime as Sandy and Raymond Filipek as Danny Zuko lead the cast with strong vocals and acting.

Some of the character roles provide some of the most interesting and memorable performances.

Courtney Butterfield is entertaining as Miss Lynch, the all-knowing principal, who is wise to the tricks of Eric Vega’s Sonny, who talks a good game but can’t escape class or detention time.

Samantha York is a natural as Patty Simcox, the perky cheerleader you love to hate, and VicAngelo Offutt makes nerdish Eugene out to be much more human than the usual simplistic stereotype.

Danya Talab is entertaining as the always munching Jan (who wisely knows that Twinkies go well with dessert wines), while Judo Manko’s Frenchy is warm, welcoming and innocently funny.

Samantha Hale’s Rizzo nails her part excellently, and her number “There are Worse Things I Could Do” is one of the best in the show.

Corey Allen Snyder, as Kenickie, is a strong dancer, and he leads a fast paced show-stopper in the first act’s “Greased Lightning.”

Megan Oliver as Marty, Joey Kulza as Doody and Marcellus Hogan as Roger are also strong in their supporting roles.

Talent runs in the Hogan family: while Marcellus is playing Roger in “Grease” at HFCC, his brother Tauren is playing Seaweed, one of the leads in “Hairspray” at the Bonstelle, Wayne State University’s undergraduate theater.

‘BEAUTY AND THE BEAST’: MORE THAN A MOVIE
The Fisher Theatre’s touring Broadway musical “Beauty and the Beast” is not a remake of the Disney movie. It features new songs, beautiful sets and big song and dance numbers that go beyond enchanted dancing silverware.

However, be forewarned: young children – even those who enjoy the movie – may become bored. If a youngster can’t sit through live entertainment or religious services, don’t expect them to last for a musical.

Even from mid-house it is difficult even for early elementary children to remain focused, especially during the soft ballads. There are also frightening fight scenes that can scare little ones. A word to the wise: spend money on a sitter instead of tickets for preschoolers. They aren’t ready for a large professional venue.

“Beauty and the Beast” (if you’ve been in isolation for the last 20 years) is the story of Belle, a young woman in a provincial town, and a once arrogant prince trapped in the body of a beast until he can learn that love is more than skin deep. Throw in a lively chorus of villagers and enchanted objects, and you have a fun show to savor.

However, some of the new songs are too quiet in the beginning, and they lose the attention of the audience – especially the children. The Beast’s song “If I Can’t Love Her” at the end of Act 1, and its reprise in Act 2, are not good showcases for Dane Agostinis, who plays the Beast. His belting voice is strong, but his soft voice is weak, and just barely stays on key. His acting is wonderful; however, when he finally becomes a prince again (when the mask comes off) he looks plain and tired – he reminded me of Luke’s father (Darth Vader) in Star Wars when the scary black face shield came off at the end of the battle – he’s pale and sweaty. Audiences expect a handsome prince, and one would think a Broadway tour could make any actor look good.

Emily Behny as Belle is all around wonderful – a marvelous actress, vocally strong and sincere and she effortlessly makes the part hers.

There is a delightful percussive pewter tavern mug scene that is original and fun, and the show-stopping enchanted servants’ “Be Our Guest” is fun and uplifting.

The special effects are neat – including the illusion of rain generated through the use of a scrim and superb lighting effects. Be advised, though, if you are suseptible to seizures. A strobe is used when the beast turns back into human form.

One other warning – Gaston stabs the Beast in the back after the Beast spares him – which is very frightening for children. The other scary stuff – wild wolves and fist fights – aren’t too terrible.

The show closes Sunday, so if you’re a fan of the tale old as time, catch it while you can. Tickets are available at the Fisher Theatre box office and through TicketMaster.