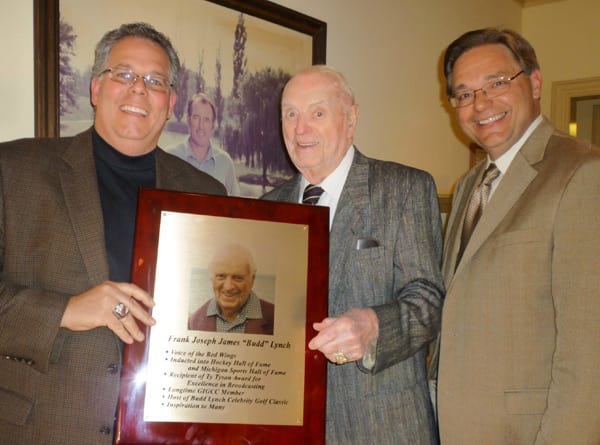 Photo by Evelyn Cairns
Frank Joseph “Budd” Lynch of Wyandotte (center), well known as the Voice of the Detroit Red Wings, is shown with a plaque recognizing highlights of his career. Pictured with Lynch are Jerry Tuinier (left) of Grosse Ile, and Tom Kuzmiak, secretary of the Grosse Ile Golf and Country Club, where a tribute to Lynch was held on April 6. The club will be the location June 25 of the annual Budd Lynch Celebrity Golf Classic, which has raised more than $900,000 for the Guidance Clinic in the last 23 years under Lynch’s leadership.

By Evelyn Cairns
The plaque presented to Frank Joseph “Budd” Lynch of Wyandotte on April 6 during a special tribute to the Downriver icon at the Grosse Ile Golf & Country Club says it all . . . well not quite.

The inscription on the plaque recognizes Lynch as the Voice of the Detroit Red Wings and lists the following highlights of his career:

• Inducted into the Hockey Hall of Fame.

• Recipient of the Michigan Hall of Fame Ty Tyson Award for Excellence in Sports Broadcasting.

Lynch, who was born in 1917, lost his right arm and shoulder in the World War II D-Day invasion as a member of the Canadian Army Essex Scottish Regiment. He took up golf as a part of his therapy, a path that eventually led him to Grosse Ile.

His broadcasting career kicked off in 1949 after he was asked by Red Wings general manager Jack Adams to be the team’s play-by-play announcer.

In 2009, Lynch was honored at Joe Louis Arena in recognition of the 60th anniversary of his first play-by-play TV broadcast of a Red Wings game.

For 23 years, the Downriver icon has organized the Budd Lynch Celebrity Golf Classic at the country club, recruiting media and sports friends to help him raise more than $900,000 for The Guidance Center, which serves the Downriver area through its headquarters in Southgate.

This year’s tournament is scheduled for June 25 at the country club.

The honoree also is known as supporter of amputees and a champion for their rights.

His attempts to retire have twice been unsuccessful: He was persuaded to stay with the Red Wings as director of publicity by Alex Delvecchio in 1975, and in 1982, Marian Ilitch convinced him to continue in his current posi-tion of Red Wings public-address announcer.

In accepting the plaque, which has been hung in the hallway of the club, Lynch quipped that his mother used to say a person shouldn’t complain about getting old “because many are denied the privilege.

The concert will feature arias, choruses and orches-tral excerpts from masterpieces by composers including Strauss, Borodin and Rimsky-Korsakov.

Laurie Mata, the SGLS 2011 Idol contest winner, will sing Memory,” from “Cats,” and the 2010 winner, Stacey Mason, will join Nicole Greenidge-Joseph in the “Flower Duet” from “Lakme.”

Greenidge-Joseph was a Michigan District winner of the 2011 Metropolitan Opera National Council Auditions.

Also performing at the concert will be Bernard Holcomb, a Michigan District Metropolitan Opera National Council winner; and Keenan McCarter, who has placed second and third in the Southern Illinois Young Artist Organization Vocal Competition and National Association of Teachers of Singing Classical Competition.

In addition, the Downriver Community Voices will sing “The Anvil Chorus” from “Il Trovatore,” and “Va Pensiero” from “Nabucco.”