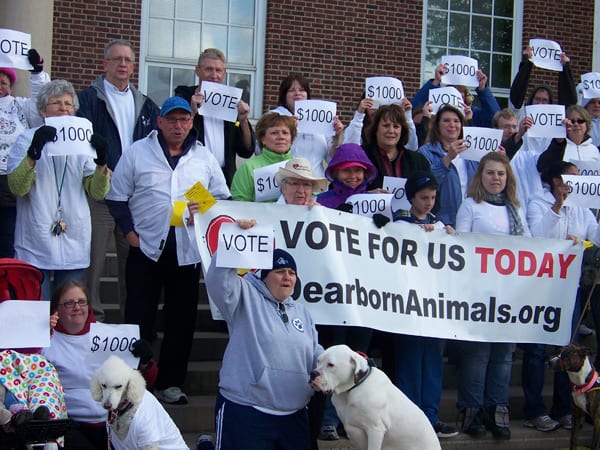 Photo by Sherri Kolade
Friends for the Dearborn Animal Shelter volunteers and employees gather during a flash mob in front of Dearborn City Hall April 10.

By SHERRI KOLADE
Times-Herald Newspapers
DEARBORN – Who let the dogs out? That was the question April 10, during a flash mob, the term used for a seemingly random choreographed performance, that took place in front of City Hall by the Friends of the Dearborn Animal Shelter.

The singing and dancing over the song “Who Let The Dogs Out?” was for a very serious cause — to adopt dogs and raise $100,000 for the shelter by April 16.

FFDAS Executive Director Elaine Green said the shelter wants to gain attention for the challenge, which pits the shelter against 107 other shelters nationwide. FFDAS is the only shelter involved in the challenge in Michigan.

“Right now we are in the vote portion of the challenge,” Green said. “We are trying to get people to go on our site and vote for us.”

During the flash mob, dozens of volunteers and their animal companions dressed up in outlandish outfits, with numerous dogs dressed up as princesses and other characters.

The American Society for the Prevention of Cruelty to Animals sponsored the challenge for its third year in a row, Green said.

FFDAS President Laurie Buhr said it really helps that when animals are adopted, even more attention comes to the animal shelter.

“The more people will come in and adopt them, give us votes so those are all the things we need,” Buhr said.