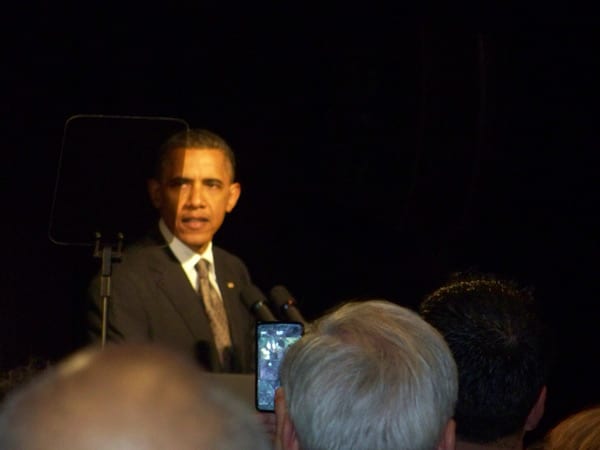 Photo by Sherri Kolade
President Barack Obama speaks to a crowd of several hundred during his fundraiser visit to The Henry Ford April 18. Obama spoke for about 20 minutes on topics including education, taxes, the auto bailout and health care reform.

Obama focuses on health care, employment during visit to The Henry Ford

During his fundraiser visit to The Henry Ford April 18, he attempted to stir up emotions in the hundreds of attendees when he spoke on pulling America up by its bootstraps and getting back to work.

Education, taxes, the auto industry bailout and health care reform were a few of the topics Obama spent about 20 minutes addressing in front of a packed audience.

“For the first time in nine years there are no Americans fighting in Iraq,” Obama said. “We have refocused our efforts on (terrorism), Osama Bin Laden no longer walks the face of this Earth — that is what change is. This change would not have happened if it weren’t for you.”

His speech also addressed his supporters and his need of assistance to be reelected during the next presidential campaign.

“I am here not just because I need your help — although I do — I am here because the country needs your help,” he said.

Obama added that everybody who works hard has a chance to get ahead, not just the richest.

“That is the vision we share, that is the committment we made to each other and we knew it wasn’t going to be easy,” Obama said. 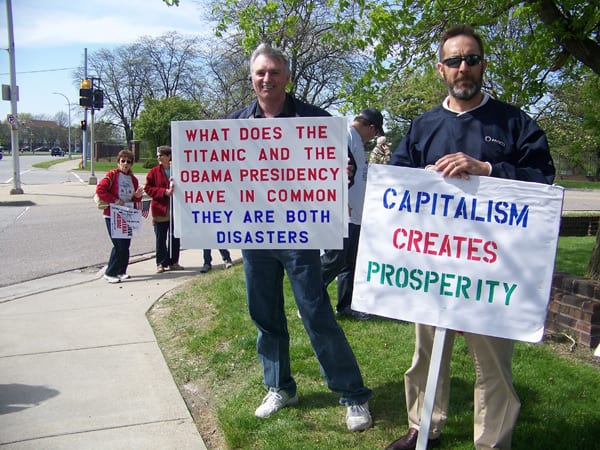 Photo by Sherri Kolade
A handful of protesters against President Barack Obama, stood down the street from The Henry Ford April 18. The organization behind the protest were Americans For Prosperity, a national grassroots organization that advocates principles of entrepreneurship, fiscal and regulatory restraint. The protesters hoped to garner attention from passing drivers, many of which honked to show their support.

Referencing the 2008 auto industry bailout, Obama discussed “what change looks like,” saying change was the decision made to rescue the American auto industry from collapse when some politicians wanted to let the companies go bankrupt.

“Because of your commitment here in the United States of America nobody has to go broke because they get sick,” he said. “Already 2.5 million young people have health insurance that didn’t have it before. Every American will be able to get health care regardless of who you are, how much money you make, doesn’t matter if you have a pre-existing condition, you will be able to get coverage, that is what change is.”

Another change Obama mentioned was the repeal of Don’t Ask Don’t Tell, the official U.S. policy on gays serving in the military that barred openly gay military personnel, in 2010.

“For the first time in history you don’t have to hide who you love in order to serve the goverment,” Obama said.

Obama addressed the topic of making education affordable, saying the country has to make decisions to balance out the budget.

“We can’t leave a bunch of unpaid bills to our kids and grandkids,” Obama said. “That means we got to make some tough decisions, get rid of programs that don’t work and make sure we invest in programs that do. We also have to make sure the tax system reflects everybody doing their fair share.”

One of Obama’s supporters, Harper Woods resident Shanna Reed, said she attended the event because she likes his views on education, among others.

“I really support how he is for education and making college affordable,” Reed said. “That is a very personal issue for me and I know there are families who cannot afford for their children to go to school. That is why so many kids want to get high-paying jobs so they can pay back the high student loans.”

“I am a great supporter of Obama and I think he has done a great job with the country,” Ebeling said.

Ebeling, who lost her job in 2008, said because Obama has helped in creating more jobs, she now has one.

“I was able to go back to school and get a job because of it,” Ebeling said.

Not everyone was a fan of Obama. Down the street from The Henry Ford were protesters from Americans For Prosperity, a national grassroots organization that advocates principles of entreprenuership and fiscal and regulartory restraint. The protesters hoped to garner attention from passing cars, many of which honked at them to show their support.

AFP member Jean of Plymouth (who withheld her last name) said she wants to show the other side of the story.

“A lot of people who listen to liberal media don’t hear the truth in conservative media,” Jean said during the protest. She added she wants passersby to question the liberal media.

Protestor Lisa Montpetit said she came to the protest because they are saying “no to another four years.”

“We are promoting conservative values and objecting to government spending increase, the national debt and devastating our country under this administration,” she said.