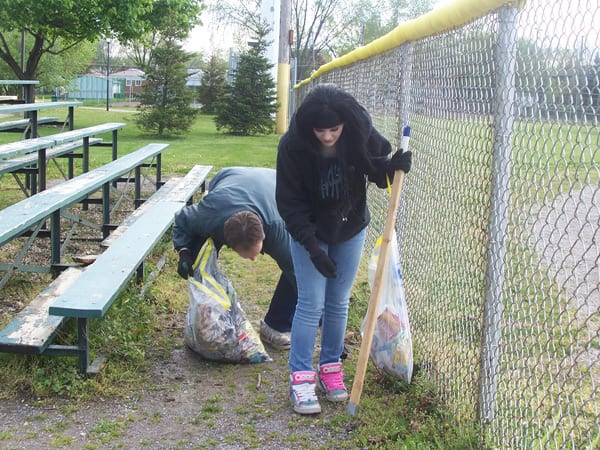 Keeping the creek clean
Photo by Sherri Kolade
Dearborn Heights residents volunteer in the Ecorse Creek Clean Up project April 21. The Dearborn Heights Watershed Commission hosted 53 volunteers at Swapka Park, who cleaned up the creek for the 19th year in a row. Everything from tires to plastic bags and shopping carts were picked up in and along the creek.

By SHERRI KOLADE
Times-Herald Newspapers
HEIGHTS — An anniversary could include anything from flowers to chocolates and maybe champagne. For the Dearborn Heights Watershed Commission, an anniversary is nothing without grilled hot dogs, trash and garbage bags.

During the Ecorse Creek Clean Up project April 21, the DHWC hosted 53 volunteers at Swapka Park, who cleaned up the Creek for its 19th year in a row.

Steven Roberts, co-chair for the DHWC, said he notices a difference in the Creek.

“Lately its been getting a lot cleaner than it has been in years because we are not finding as much debris,” Roberts said during the cleanup.

Many of the volunteers teamed up in pairs and picked up plastic bags, shopping carts, car tires and everything in between.

Dearborn Heights resident Ahmad Awada said even though this was his first time cleaning up parts of the Ecorse Creek, the notion of taking care of the Earth is not new.

Awada and two friends traveled along the Gulley Bridge near the Ecorse River and picked up various metal pieces, along with many other objects.

Alfred Nason, another volunteer from Dearborn Heights, has been volunteering at the Creek cleanup for the past 14 years.

“We picked up all the trash and mostly the plastic bags and the stuff that is not biodegradable,” Nason said of his
part during the cleanup. He added the volunteers looked for plastic bags, which do not dissolve. “That was the main target,” he said.

Roberts said the day’s cold weather did not deter volunteers from helping out.

“We’ve had a lot of people come out that feel really responsible for our Creek,” he said. “We’ve only found five tires where some years we’ve found 20. People like drinking fresh water and the cleaner you keep the Creek the cleaner the water can be.”

After the cleanup, hot dogs were grilled for the volunteers, and hot cups of coffee and donuts were served, among other treats.