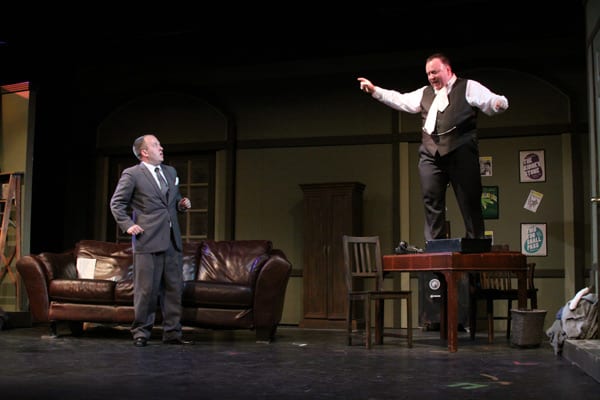 Photo by Gordon Mosley
Dearborn residents Dan Hartley (left) as Leo Bloom and Brian Townsend as Max Bialystock star in the Mel Brooks and Thomas Meehan musical comedy “The Producers.” The show runs weekends now through May 20 at the Players Guild of Dearborn. For more information call 313-561-TKTS or go to www.playersguildofdearborn.org.

By SUE SUCHYTA
Detroit theaters opened two great shows this week: The Blue Man Group will entertain audiences through Sunday with their unique blend of percussive music, stunts and comedy at the Fisher Theatre, while the City Theatre (next door to the Fox) began its second year of Mitch Albom’s wonderful play “Ernie,” a tribute to Ernie Harwell, the Voice of Summer.

‘ERNIE’ – LONG GONE BUT NEVER FORGOTTEN
Inspired by humble baseball announcer and legend Ernie Harwell, with whom playwright, sportswriter and novelist Mitch Albom shared a long-standing friendship, comes the story of ‘Ernie,” back for a second year at the City Theatre inside Hockeytown Café in Detroit.

The show runs Thursdays through Fridays now through July 29. For tickets or more information call 800-745-3000, or go to www.OlympiaEntertainment.com.

Albom said Harwell talked to him about writing a play about his career shortly before he succumbed to the bile duct cancer that ended his life at 92.

The show, launched in 2011, was an audience favorite, both because of audiences’ love for Harwell and for the baseball memories the show evokes.

Directed by Tony Caselli, the show stars Will David Young as Ernie Harwell and Timothy “TJ” Corbett as the Boy.

Young is so good at capturing the voice of so famous a broadcaster that one begins to feel as if Harwell were up on stage, one of the greatest compliments one can give to an actor who must recreate a voice and capture a personality known by millions.

Corbett is a convincing young and sincere teen baseball fan who is in fact already a father. He also has a wonderful singing voice, and a quick energy and gracefulness around the stage.

The set is simple: a stadium waiting area prior to a Harwell tribute. A teen boy enters and his exuberance encourages Harwell to talk about his life, inning by inning, from his childhood to his retirement.

Harwell, who never liked to talk about himself, reluctantly begins telling his stories, from the famous players he knew to Lula, his wife and the love of his life.

The media show of photos and film clips of baseball players and games, blended expertly and projected onto a center and two side screens, adds an extra layer of baseball memories, whether they show legendary players or the former Tiger Stadium.

The actors, though, tell the story and draw you in; the media clips are a nice extra touch.

If you loved Harwell before, you’ll miss him and appreciate his life and announcing even more after the show.

So share the show with a friend or fan, just like you would a Tiger baseball game. “Ernie” is something for Michiganders to appreciate and treasure, for he was “the voice of summer” and a humble man to emulate.

THE BLUE MAN GROUP COMES TO THE FISHER
You may be blue or indifferent when you enter the theater, but you’ll be grinning and happy when you leave.

The Blue Man Group, an entertaining trio of men dressed completely in blue who are percussionists, stuntmen, silent comedians and jokesters, will be in town now through Sunday at the Fisher Theatre.

For more information call 800-982-2787 or go to www.ticketmaster.com or www.broadwayindetroit.com.

The group really does defy definition. One moment the trio is drumming amid a bright spray splash of neon paint and the next they are catching marshmallows tossed to them in their mouths.

They don’t talk, but sound fills the theater, from the percussive PVC pipes to the band to the roaring laughter from the house.

The Blue Man Group makes fun of our foibles, whether spoofing smart phone usage to battling over Cap’n Crunch.

Don’t arrive late or you might be shot – on live video feed projected onto a giant screen. Two “lucky” audience members end up on stage, becoming part of paint performance art or discovering the joy of Twinkies.

My favorite part was when the audience got to bounce giant lit-up beach balls around the auditorium while more streamers than I’ve ever seen at a children’s play were streaking through the auditorium, much to the delight of the “grownup” kids.

So don’t delay – you have until May 13 to use the Blues to color things happy.

UPCOMING AUDITIONS: ‘WONKA,’ ‘WOODS’ AND ‘RENT’
Several local theater groups are holding auditions for summer shows. The Players Guild of Dearborn will hold auditions for the summer Guildling show, “Willy Wonka Jr.,” while the AKT Theatre Company in Wyandotte will hold auditions for teens and young adults for “Into the Woods.” Amateur actors 18 and up may audition for the Southgate Community Players production of “Rent.”

“INTO THE WOODS” will be performed this summer by the AKT Theatre Project in Wyandotte. “Into the Woods” is a musical by Stephen Sondheim and James Lapine. When familiar fairytale characters go into the woods to make their wishes come true they leave with new insight about being careful for what you wish. Auditions will be held at 7 p.m. May 25, with callbacks at 6 p.m. May 28 and May 29 at the Wyandotte Arts Center. The show runs Aug. 2 to 11 in Wyandotte. For more information email [email protected]