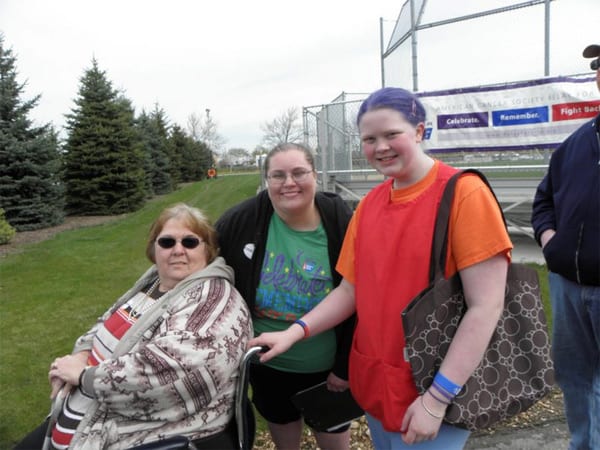 Dynamic Duo
Photo courtesy of the Schuler family
Janie Suchara (left), the mother of Alysia Schuler (second from left), 34, who is the mother of Laindra Schuler, 13, celebrate Suchara surviving cancer at a past Relay For Life of Dearborn event. The Relay For Life is the American Cancer Society’s signature fundraising event and celebrates the lives of people who have battled cancer, remember loved ones lost and fight back against the disease, according to relayforlife.org. The family has been active for the past 10 years in Relays in Dearborn.

By SHERRI KOLADE
Times-Herald Newspapers
DEARBORN — Cancer can be a big, ugly scary thing when one is battling it alone.

But when a mother and daughter are added to the equation, the fear can be managed just a little bit more.

But what does cancer have to do with a mom and her child? A whole lot, especially when it comes to Alysia Schuler, 34 and Laindra Schuler, 13 – a mother and daughter who are determined to fight a monster that doesn’t always fight fair.

For Alysia Schuler, 10 years ago was just like yesterday when the Schuler family decided to join Relay For Life of Dearborn.

Her husband and daughter began on a team in Dearborn and later the whole family joined in.

Relay For Life is the American Cancer Society’s signature fundraising event and celebrates the lives of people who have battled cancer, remember loved ones lost and fight back against the disease, according to www.relayforlife.org.

After several years of Alysia Schuler watching her husband and daughter participate in Relays, she decided to become a participant after she had her son (Joshua Schuler, now 6). She later turned into a team captain, vice chair and current event chair of Relay For Life of Dearborn.

The family’s team name is Save Our Skins, a play on words that has a serious meaning.

In 2007, Laindra Schuler was 9 years old when her parents picked her up from school on an early spring day and took her out to eat. But it was no play date; they told her that her father, Craig Schuler, 42, was diagnosed with melanoma, a skin cancer.

“I honestly thought we were just going out to eat,” Laindra Schuler said. “I was feeling really empty when they told me and at the time I hadn’t realized what cancer was and how it affected people and when I got started with Relay that year I understood what I could do to prevent it.”

Craig Schuler is now a five-year survivor of melanoma; last year he had carcinoma that was surgically removed.

Laindra Schuler now puts sunscreen on often at the request of her mother, because moms will always be moms, she said.

“I didn’t like sunscreen, but she stands on top of you and says, ‘Put it on,’” Laindra Schuler said.

Even though it is not unusual for families to be involved in teams in Relays, Laindra Schuler’s demonstration of her passion sometimes ends up with style changes to her hair.

Last year she raised $500 to donate to the American Cancer Society and she wanted to dye her hair purple for the cause-an act that most mothers could possibly disapprove of, but Alysia Schuler, though hesitant, was all thumbs up and her daughter dyed her hair.

“I was like ‘no,’” Alysia Schuler recalled of her daughter’s request. “I joked around saying if you raised the money you could dye your hair. She raised the money and I could not go back on my word…She definitely has a good head on her shoulders.”

This year Laindra Schuler has plans to raise $500 for the same cause (currently she has raised $400) but instead of dyeing her locks purple she has plans to dye them pink on Saturday.

Alysia Schuler said their commitment to helping the Relays is a family affair.

“We eat, breathe and sleep Relay for Life,” Alysia Schuler said with a chuckle. “(My) son looks forward to it every year and to have children that want to make a difference is something my husband and I are proud of. We try to instill in our children the sense of giving back is something that should be standard in your life.”

Even though Relay For Life of Dearborn is a 24-hour-a-day, seven-day-a-week cause in the Schuler’s household, one day out of the year that is set aside for mothers doesn’t stand a chance against the family’s dedication.

Relay For Life of Dearborn falls on Mother’s Day weekend May 12 and 13, and the Schuler’s plan to participate in Relay, spend the day to themselves, especially for Alysia Schuler.

As far as the gifts go, Alysia Schuler said it is not about the materialistic stuff.

“I kind of always say, ‘Every day is Mother’s Day,’ because I have to do the dishes and wash clothes,” she said with a laugh. “But I really enjoy the handmade heartfelt cards and gifts (my children) make at school. I would much rather have a note or picture than something from the store.”

Other everyday actions can be a gift alone in Alysia Schuler’s eyes. “Sometimes I would like (Laindra) to do her chores without asking but what parent doesn’t,” she said.

As a mother and daughter who focus on family, help to raise awareness through various causes and make time for one another, they still have their moments like everyone else Alysia Schuler said.

“We definitely have those moments every teenager and mother have,” she said. “But I am very proud of the young woman she is and I cant imagine my life without her.”