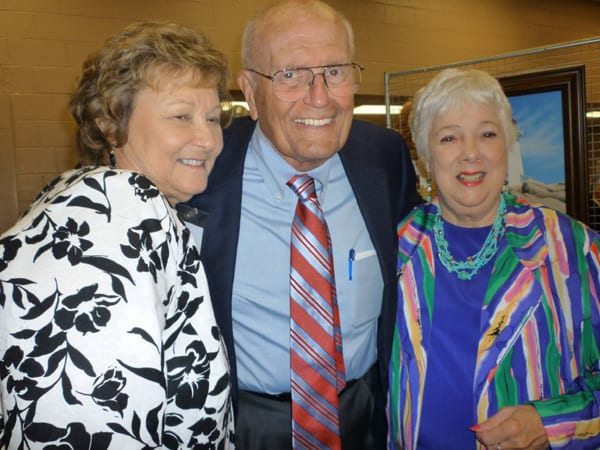 President Judy Nelms paid a special tribute to Sharon Sims, as “the driving force in creating the show to promote and showcase Downriver artists.”

U.S. Rep. John Dingell, known for his support of the arts, was on hand to congratulate the organization and the winning artists.

He told the audience about the annual 15th District Congressional High School Art Competition he has hosted since 1982. Dingell said that works of the Downriver winners, announced earlier this month, will be displayed in the corridor connecting the Capitol to the Cannon House Office Building; in his Washington, D.C., office; and at his district office in Dearborn.

The coveted Artists’ Choice Award and $100 went to Shirley Ciungan for a watercolor, “Sunflowers.”

Norma Wurmlinger, former mayor of Southgate, was honorary chairman of the show, and Joe Ogden, master of ceremonies. Edee Joppich was the juror. The show ended on May 6.

WCT slates play at center
The Wyandotte Community Theatre will stage the dramatic and controversial play “Doubt, a Parable,” by John Patrick Shanley, at 7:30 p.m. May 18, 19, 25 and 26 at the Wyandotte Arts Center, 81 Chestnut.

The play is about the suspicions of Sister Aloysius, principal of St. Nicholas Catholic School, that her parish priest, Father Flynn, is having a sexual relationship with one of the male students at the school.

Set in 1964, before such misconduct in the Catholic church became headlines, the play stars Sue DeLosier, Tim Wojtala, Joy Zouzaneas and Kelly Jackson.

Jeffrey Tate is the producer, and Patrick Christie, the director, with Lynn Babchek-Tate as assistant.

Benefit tour is scheduled
A fund-raising tour of homes in Dearborn’s historic Springwells Park neighborhood, established by Edsel B. Ford in 1939, has been scheduled for 10 a.m. to 5 p.m. Saturday.

Preceding the tour, a luncheon and boutique, as well as a coffee and conversation session with a designer, will take place at the TPC clubhouse, 1 Nicklaus Drive, where a courtesy shuttle and free parking will be available.

May 26-28 — Civil War Remembrance at Greenfield Village, honoring veterans who fought and died to preserve our nation’s freedom; more than 450 military re-enactors will create an authentic Civil War encampment in observance of Memorial Day, with parades, artillery demonstrations and 19th century mu-sic; for more information, call 313-982-6001 or go to www.thehenryford.org.

May 24 — International buffet luncheon, “A Taste of the Mediterranean,” at the Fifty-One O One Restaurant on the Henry Ford Community College Greenfield Road campus; featuring the cuisine of It-aly, Spain and Greece; seating from 11 a.m. to 12:45 p.m.; $15 per person; for reservations (requested), call 313-2060-5101.