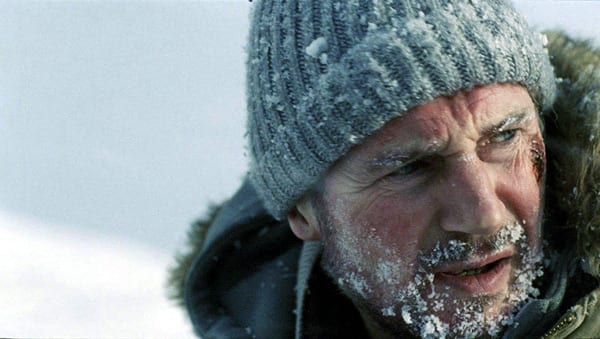 Liam Neeson in “The Grey”

PICKS OF THE WEEK
“The Grey” (R) —— A plane carrying Alaskan oil—rig roughnecks goes down in the frigid wilderness just as the wolves are getting hungry. Fortunately, Liam Neeson’s character survived the crash. Neeson plays Ottway, a man hired by the oil rig to keep wolves and bears away. Yet when they’ve crashed into the tundra and wolves are circling the survivors, some people still want to argue with the expert.

The trailer and posters suggest that this is a movie about Liam Neeson punching wolves. The script also gets a bit philosophical without getting too corny or heavy—handed. For a movie called “The Grey,” things sure get dark. Well worth checking out for a tale of grizzled determination and man—versus—wolf survival.

“Chronicle” (PG—13) —— A few high—school boys develop mental powers, and it’s all fun and games —— for a while. This refreshing, character—driven movie has supernatural powers, but veers away from colorful tights and silly catchphrases. After three boys explore a mysterious hole in the ground, they come out with new psychokinetic powers that they use for tomfoolery. As their abilities grow, dark sides come out and bonds are put to the test.

The whole thing is shown from the perspective of a handheld camera that the teens always seem to have with them. The found—footage approach has been used quite a lot lately, and it’s hard to say if it brings anything to this film. What is here is an original movie with an original take on something we’ve otherwise seen before.

“Rampart” (R) —— Woody Harrelson plays Dave Brown, a Los Angeles cop with a corrupt sense of duty. Brown’s life spirals out of control after he gets caught on film viciously beating a suspect. The film is tightly focused on Harrelson and his portrayal of a irredeemable, delusional man. Harrelson makes this dirty cop captivating.

DOG OF THE WEEK
“One for the Money” (PG—13) —— Based the first book in a long series of quirky mysteries, this film misses all the good parts about detective stories and just gives us the cliches and one—note characters. Stephanie Plum (Katherine Heigl) is a sassy Jersey girl who gets down on her luck and takes a job as a bounty hunter. Her first assignment is to track down Morelli (Jason O’Mara), a former cop who had a high—school fling with Stephanie.

It’s a detective—themed romantic comedy romp with the lady from “Grey’s Anatomy,” so what could go wrong? The banter is excruciating, the mystery plot is dull and the Jersey accents are so bad they must be crossing some line. Even those who like Heigl will find her as irritating as the rest of us.