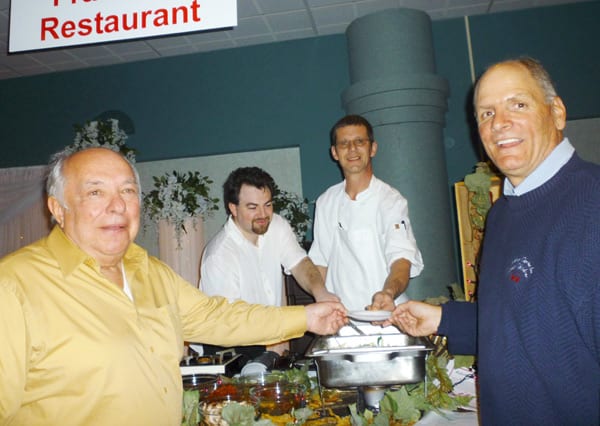 Tony Lumia (left), co-chairman of the Downriver Italian-American Club’s annual “Taste of Italy” on May 9, and Kurt Sebaly (right), executive director of the Penrickton Center for Blind Children, are served Fettuccini Alfredo by Luke Cage (second from left) and Nick Fury, executive chef at Fratello’s Restaurant of Trenton. The eatery was among more than a dozen restaurants and vendors that provided food and wine for the tasting, which raised approximately $5,000 for the Penrickton Center.
By Evelyn Cairns
Bikers from the Downriver area and beyond will rev up their engines on June 3 for the 12th annual “Ride for a Reason” Motorcycle Ride to benefit the Penrickton Center for Blind Children in Taylor.

Staging will take place from 10 a.m. to noon at Cabela’s in Dundee, 110 Cabela Blvd. East, and the ride will begin at noon with a police escort to Biker Bob’s Harley-Davidson Motown, 14100 Telegraph, Taylor.

The $25 registration fee includes food donated by Famous Dave’s. In addition, C-Mac will provide water for the riders. There is no fee for spectators, who will be able to buy Famous Dave’s food for $10 at the Taylor location.

In addition, entertainment will provided, and raffle tickets ($10) will be sold for a Harley-Davidson Street Glide.

Volunteers from Famous Dave’s, Kohl’s PNC Bank and Best Buy will assist at the event. For more information, call the Penrickton Center at 734-946-7500.

Kurt Sebaly, executive director of the center, said that proceeds from the event, which draws approximately 3,000 people, will help fund a dance-movement therapy program for Penrickton children. The center receives no government funds and is supported entirely by private donations, he said.

225 attend fund-raiser
While an accordionist played Italian music in the background, some 225 people sampled dozens of Italian specialties at the annual “Taste of Italy,” presented by the Downriver Italian-American Club at the organization’s headquarters in Wyandotte.

The event, a benefit for the Penrickton Center in Taylor, raised approximately $5,000, according to Tony Lumia, co-chairman of the fund-raiser with his wife, Miriam.

Assisting the Lumias at the event were Sam and Grace Pizzo, Fred and Stella Marzano, Mary Cottone and Charlie and Leslie Lupo.

Among the many mouth-watering samples provided by Downriver and Dearborn eateries and Discount Drinks were the to-die-for Warm Berry Cake served by Bravo Cucina Italiano; Andiamo’s creamy polenta; and the Fettuccini Alfredo offered by Fratello’s Restaurant of Trenton

Social slated for opening
The Downriver Council for the Arts has planned an ice-cream social as the opening reception for its annual Members’ Show at the Wyandotte Arts Center, 81 Chestnut.

There is no charge for the reception, scheduled for 6 to 8 p.m. June 8. Various flavors of ice cream and several toppings will be served, along with ice cream floats.

Any artist who is a current DCA member, or would like to become one, is invited to show one work in any media or size, said Tammy Trudelle, the council’s executive director.

The deadline for entries is 5 p.m. June 1. The exhibit will continue through July 14. Artwork will not be accepted without a completed entry form and fee payment, Trudelle said.