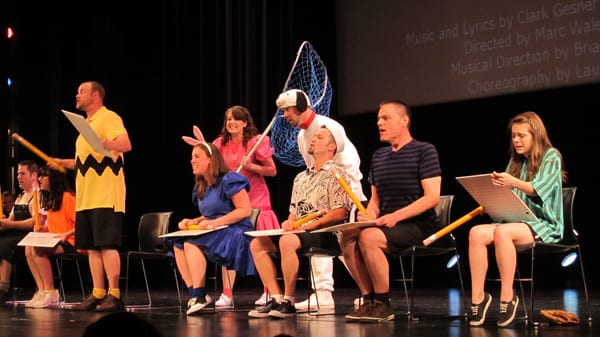 By Sue Suchyta
The cast may be pure Michigan, but the clear winner May 22 was “Almost Maine” as the Players Guild of Dearborn received six awards for the quirky drama about unexpected love under the northern lights at the 27th annual Dearborn Area Theatre Association awards celebration at the Ford Community & Performing Arts Center.

Director Paul Bruce said he was surprised yet mystified and amazed that the adjudicators saw past the show’s simplicity to see something bigger than that.

“It’s one of the most beautifully written shows I’ve ever seen and I think that translated, so that was our strength,” Bruce said. “An amazing cast of 19 people that any director would give their eye teeth to get, wonderful crew people, every last person involved with the show was delightful.”

It was nice to see all of their hard work pay off, Gedert said.

“It was nice for me to win, but I think it was an even better feeling for our show to win and our director to win as well,” Gedert said.

Honored shows in the high school division include Divine Child with four awards for “The Diary of Anne Frank” and five for the musical “Annie Get Your Gun.”

Edsel Ford High School received two awards each for “The King and I,” “The Gift of the Magi” and “Amahl and the Night Visitors.”

Benjamin Timpf, who won best lead actor in a musical at the scholastic level for his role as the king in “The King and I,” said it felt amazing how all the hard work paid off and to be recognized for it.

This is the second time he has played the king, and he said would like to play the role again.

“Playing it twice I felt like I almost made a personal connection with it,” Timpf said. “And it’s just a great feeling to really know the character and learn even more as I continue to play him hopefully a third time.”

The Crestwood and Dearborn High School drama departments were also recognized, as were the Players Guild of Dearborn’s production of “Til Beth Do Us Part” and the Dearborn Heights Civic Theater’s “Biloxi Blues,” which won two awards each.

Gordon Mosley was inducted into the Dearborn Theatre Hall of Fame, while four young thespians, age 13 and under, received the first Outstanding Youth in Theatre Awards.

Ben Blessing and Hope Lesniak, who were part of DHCT’s summer youth theater production of “Really Rosie,” while Scout Greimel and Peter Moore were honored for their part in the Guild’s summer production of “Free to Be You and Me.”

COMEDY AND TRAGEDY: HFCC PRESENTS ONE ACT FESTIVAL
Henry Ford Community College will present a two-weekend run of its One Act Festival, with four short comedies running June 14 to 17 and an experimental adaptation of Shakespeare’s tragedy of “Macbeth” June 21 to 24 in Adray Auditorium in the MacKenzie Fine Arts Center.

Thursday through Saturday performances are at 8 p.m., with 2 p.m. Sunday matinees. For more information about the show or to buy tickets call 313-845-9817 or contact theater faculty member Gerry Dzuiblinski at at [email protected]

COMEDIES
The four one-act comedies include John Stern’s “Caramels,” about a family whose patriarch has quit his job to eat caramels and read poetry all day long, and George S. Kaufman’s “The Still Alarm” about some high society friends who can’t motivate themselves to leave their hotel room even though the building is burning down.

David Ives’ “The Universal Language” is about a proposed common tongue to unite mankind that runs into some unexpected complications, and “Car Wash,” by Louis Phillips, in which the vehicles that enter a car wash never come out and none of the multiple managers will take responsibility.

Set in the 10th century, the story is retold using dance performance and movement, producing a unique interpretation of the Shakesperian tragedy.

For more information, go to www.hfcc.edu.