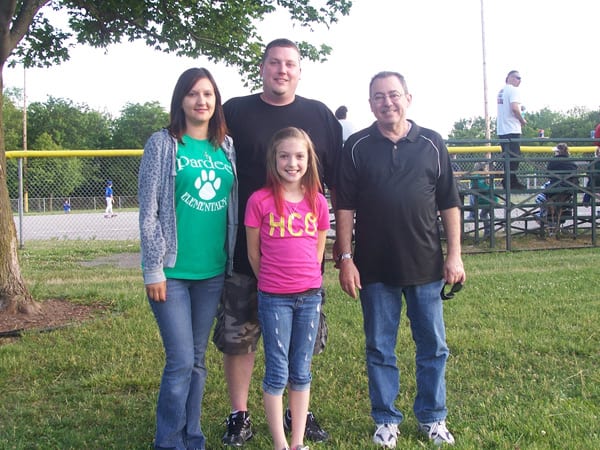 By SHERRI KOLADE
Times-Herald Newspapers
HEIGHTS — Some people go by the saying that any man can be a father, but it takes a special person to be a dad.

Gary Barkoff and Chris LeBar, both of Dearborn Heights, are considered by many to be dads.

The men belong to the D-7 Dad’s Club of Dearborn Heights, an all-volunteer sports organization in which young people ages 4 to 17 play sports and about 75 local dads guide them in the right direction.

Next year the club will celebrate its 60th year of helping the youth get involved, stay out of trouble and stay family oriented, Gary Barkoff, D-7 Dad’s Club of Dearborn Heights Director said.

“People don’t realize how fast kids grow up,” Barkoff said. “Make time to see your children’s games, they grow up so fast.”

And grow up fast they do. Barkoff, 63, remembers playing as a little boy in the club in the late ’50s and early ’60s, and now his children (between 35 and 42 years old) who played in the club, passed on the tradition to their own children.

The same family tradition can pretty much be said for LeBar, 35, who wears several hats in the club, including his main role as a trustee.

“I don’t know how many times Chris and myself hear somebody say, ‘My grandmother and my grandfather played for the Dad’s Club 30, 40 or 50 years ago,’” LeBar said. “(Now) both of my daughters play … the club is successful because we didn’t have that kind of club before.”

LeBar’s daughters, 9-year-old Riley and 12-year-old Madison, both participated in cheerleading and other sports in the club for the past five years. They are currently participating in another organization for competitive cheerleading, LeBar said.

The Dad’s Club “was the backbone for them,” LeBar said. “They both started here and together moved on.”

The girls both said they like competitive cheerleading. Riley rattled off her favorite cheerleading moves like someone would list their favorite popular bands. She also is described as her father’s running buddy, LeBar said.

“She hands out uniforms and registration forms,” LeBar said. “She is my partner in crime.”

LeBar’s wife added “that is their speciality.”

Before the Dad’s Club started, there were local sports clubs operating but not on the level of the D-7 Dad’s Club. The club started as an alternative for a father’s son to play ball.

The club began in 1953 when resident Pete Steven attempted to register his son for the Pardee School Civic Club’s baseball registration.

The registration was to start at 8 a.m. on a Saturday morning, but by 8:30 a.m., all the baseball teams were already full. Steven’s son and his son’s friends who were 6 and 7 years old, started crying because they couldn’t join the team, Barkoff said.

“Steven saw another coach with a few kids across the street at St. Albert’s Church and he told the kids, ‘Come with me,’” Barkoff said. “They went over there and they started the club with 14 kids on each team.”

Barkoff said the young people played each other for the first couple of years, and within 10 years two teams turned into 10. The club was incorporated in 1963. The city was incorporated the same year.

Barkoff said even though the club needs to come up with $10,000 for this year’s sports program and more cuts are being made, the team still stays afloat.

“We don’t turn any kids away,” Barkoff said. “We tighten our belts and we do what we have to do to keep this program alive.”

That might mean registration fees might go up this year, a move Barkoff said the club dreads. The club’s financial backbone includes fundraisers and a city allotment, which helps the club operate annually, Barkoff said.

“We have never received a federal grant,” Barkoff said. “Right now and our allotment is going to be cut but not taken away, which I am happy about.”

Outside of the club, Barkoff is a 10-year retiree from a managerial position at Ford Motor Co. LeBar is a paint detailer at car dealership Dick Genthe Chevrolet. For Father’s Day, Barkoff plans to have a barbecue with his wife, their four sons and their wives, and grandchildren.

LeBar plans to celebrate by going out to eat with his family.

“As a dad, you definitely want to put your wife and your kids before you,” LeBar said. For Father’s Day “we will spend it together but I will still wait on them because I live with three girls, I’ve got to treat them like princesses.”

All D-7 Dad’s Club games are played on Sundays at the field behind Pardee School on Pardee Road. The season will run from September until November. For any information contact Barkoff at 313-292-5909 or go to the D7 Dad’s Club website at www.d7dadsclub.org.

The next registration — for flag football and cheerleading — starts in August.