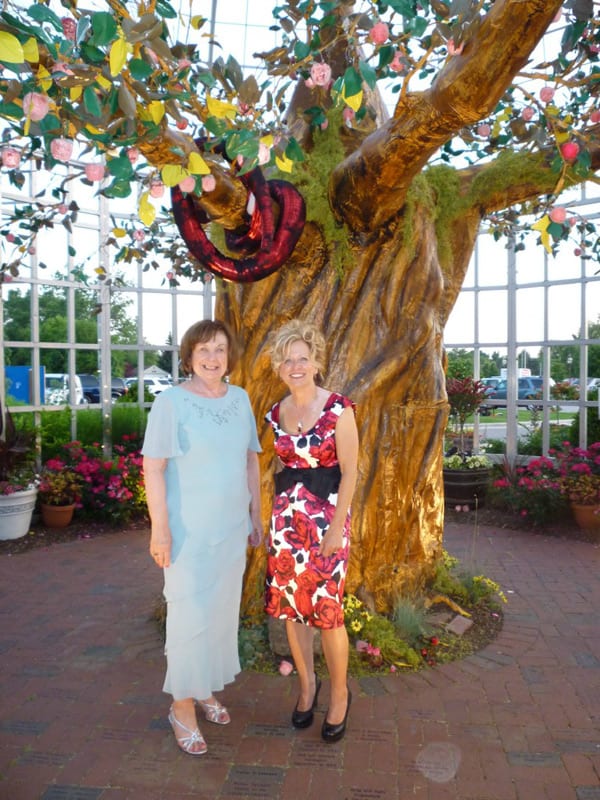 Galagoers Ronnie Padmos (left) and Ruth Sebaly, both of Trenton, pause at the towering papiermache Tree of Life decorated with hand-crafted apples, 2,000 hand-cut leaves and a serpent during the Downriver Youth Performing Arts Center’s Garden of Eden fundraiser. The event, held June 9 at the Taylor Conservatory and Botanical Gardens, raised an estimated $50,000. Padmos was one of the 50 committee members assisting with the event.

By Evelyn Cairns
The grounds of the Taylor Conservatory and Botanical Gardens were transformed into a virtual Garden of Eden June 9 for a Downriver Youth Performing Arts Center fundraising gala, complete with a symbolic Tree of Life decorated with handmade apples, 2,000 hand-cut leaves and a coiled serpent.

Approximately 400 supporters of DYPAC and the Trenton Village Theatre attended the benefit, which featured a strolling buffet hosted by The Rhapsody restaurant and Crystal Gardens, an open bar, live and silent actions, continuous live entertainment and a raffle for a 1 carat diamond.

Debbie Jackson, executive director of DYPAC, estimated that the event raised $50,000. Proceeds will be used to upgrade the lighting and sound systems at the theater, she said.

In addition to the Tree of Life, an awesome 14-foot creation of papiermache, a focal point of the event was a replica of an ark built by fathers of children enrolled in the Performing Arts Center.

Nearly 100 “Children of Eden” (DYPAC students) took part in the gala. Colorfully costumed as peacocks, butterflies and animals including elephants and zebras, they greeted and entertained guests before boarding the ark two by two.

Entertainment for the evening began with music by the Jazz on the Patio instrumental group, featuring vocalist Jennifer Carevic, a finalist in the 2010 Downriver Idol contest. Also performing were Larry Lee and Back in the Day and an African drum band.

As the guests left the party, they were presented with chocolate bars hand-crafted by Ronnie Jacek-Ruelle with the inscription “DYPAC — Thank you for your support.”

Jackson said that that she and her husband, Dr. Noel Jackson, president of DYPAC, were over-whelmed by the generosity of the community in sup-porting the gala.

“We are so proud of our young performers, and our hope is that being part of this experience will encourage them to also give back to their communities in the future.”

Date is set for fireworks show
One of the largest and most spectacular fireworks displays in the United States — make that the world — will begin lighting up the skies over the De-troit River in Downtown Detroit June 25 at 10:06 p.m. sharp.

The display, the 54th annual Target Fireworks, created and produced by The Parade Company, will feature more than 10,000 pyrotechnic effects in a music-enhanced show choreographed by Zambelli Inter-national and the world-renowned Patrick Brault, who designed the fireworks show for the 2010 Winter Olympics in Vancouver.

The Parade Company’s annual VIP rooftop party, a benefit for the Thanksgiving Parade Foundation, is sold out. Guests who purchased tickets for $100 and $200 will have the best seats in the city to see the fireworks and enjoy food by Andiamo, games and giveaways.

The fireworks show will be telecast by WDIV Channel 4.

Save the date . . .
June 22-24 — Detroit River Days Festival, along the Detroit waterfront; featuring family events and at-tractions, including the tall ships, sand sculptures, carnival rides, live concert, and food; admission will cost $3 from 11 a.m. to 5 p.m. (free during those hours on Friday) and $5 after 5 p.m. all three days; admission is free for children 3 and under and senior citizens; for more information, go to www.riverdays.com.

Sept. 9 — “Arias in Autumn,” celebrating the 200th anniversary of Verdi, presented by the Downriver Council for the Arts in cooperation with the Bellini Opera Theatre; 5 p.m. at the Wyandotte Arts Center, 81 Chestnut; featuring vocalists Eva Evola, Elena Repnikova, Carlos Seise, Dino Valle and pianist Martin Mandelbaum; tickets, $20, include an afterglow with refreshments; for more information, call Tammy Trudelle at 734-720-0671.