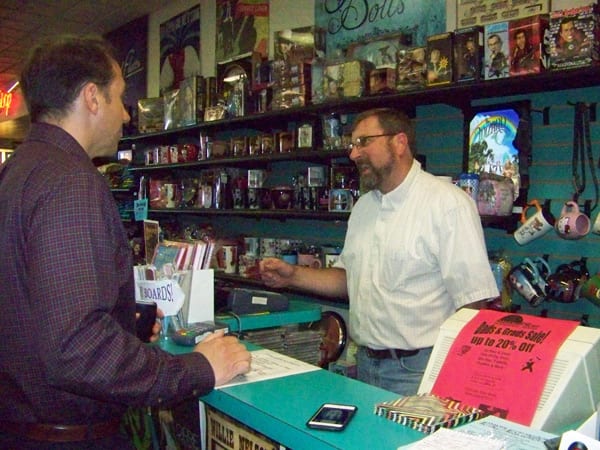 Photo by Sherri Kolade
Dearborn Music Co-owner Rick LeAnnais (right) speaks with a customer June 12. After being on the corner spot for 53 years, the store will relocate by the fall.

By SHERRI KOLADE
Times-Herald Newspapers
DEARBORN — In 1959, Dwight Eisenhower was the president of the United States, a gallon of gas was about 25 cents and the average cost of a new house was about $12,400. It was the same year the Dearborn Music store moved to its current location at 22000 Michigan Ave.

After 53 years in business in west Dearborn, the 7000-square-foot full-line mom-and-pop music store will move a few blocks away to its new location on Michigan Avenue, west of Military, in the same strip mall as ACO Hardware.

Rick LeAnnais, who owns the store with his brother Kevin, said they are moving to save space and money.

“It is basically the rent factor,” LeAnnais said. “The rent is cheaper and we lose the 1,500 to 2,000 square feet from our back room which we don’t need to pay for. We don’t need a stockroom any more and we are taking that and putting that into our square footage for our sales floor (at the new location).”

Because of faster turnaround time, music is shipped faster and sold quicker, thus creating less dependency on the back room, LeAnnais said.

“The shipping and record companies have their act together for just-in- time shipping,” LeAnnais said. “You can order something Monday and get it Wednesday or Thursday, Friday sometimes the latest.”

He added that in comparison to the 1980s, stocking records is much more efficient.

“We don’t need to stock 50 records of Led Zepplin “Four” like we used to in the 1980s,” LeAnnais said. “We only have to stock four or five of what we think we are going to sell during the course of the week.”

The move has its benefits and drawbacks, LeAnnais said.

“There is a drawback of losing that foothold that you built for 53 years in the same location,” he said.

The store’s foothold includes customers who travel once or twice a year to the store from out of town to buy music they cannot find anywhere else, LeAnnais said.

LeAnnais will rent half of the 10,000-square-foot building. LeAnnais said the other space is currently empty and he is unsure if it is leased out.

With a smaller space, LeAnnais said the new- rectangular shaped building won’t have the same charming atmosphere as the current building but there is hope.

“One thing about Dearborn Music’s current location is that it is so unique… our customers are happy that they can find a physical aspect of music,” LeAnnais said. “There are four different buildings, room after room … but for the new building we will have to make that atmosphere in different ways, but it is going to have its unique quirks and turns.”

The business, originally named the Dearborn Music Shop was established in 1943 four blocks west of its current location, and LeAnnais’ father, Phil, purchased the store in 1956, moving it from its original location in 1959 and later renaming it Dearborn Music in the 1970s.

While still keeping up with the times, Dearborn Music isn’t afraid to step back in the past and cater to their old-school customers, some who have been shopping there for decades, like Roseville resident Bill Minjoe, who has shopped there since the 1990s.

“The selection keeps me coming back,” Minjoe said sifting through bluesy 45s at the store. “You can’t get this music, blues and stuff anywhere else.”

As far as the move, Minjoe said because the move is not far from where the store’s current location is, he thinks they will do all right.

But there was a time when the store was floundering. It was five years ago and people were getting laid off in the area and buying less music, LeAnnais said.

Before the store opens in the fall the city has to rework an ordinance so Dearborn Music can sell its used products, LeAnnais said.

“We still have some issues with the city that shouldn’t take too long to resolve,” LeAnnais said. “The (city) has to rework it so we can move down there.”