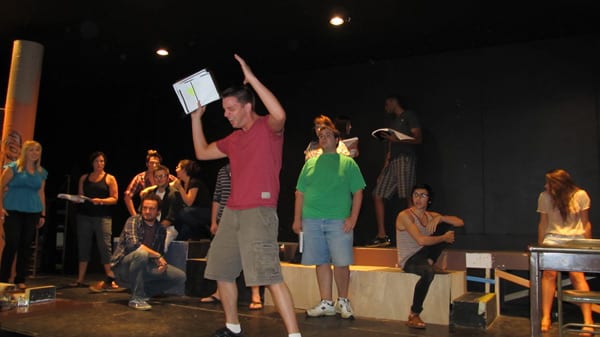 Photo by Sue Suchyta
The Southgate Community Players cast of “Rent” rehearse a scene from Act I at the Corner Playhouse. The production runs July 13, 14, 20 and 21 at the Corner Playouse, 12671 Dix-Toledo Road in Southgate. For tickets or more information, call 734-282-4727 or go to www.scponstage.com.

By Sue Suchyta
The Southgate Community Players present the Tony and Pulitzer prize-winning musical “Rent” at 8 p.m. July 13, 14, 20 and 21 at the Corner Playhouse, 12671 Dix-Toledo Road in Southgate.

Jonathan Larson’s rock musical, based on Puccini’s La boheme, follows a year in the life of struggling and penniless artists and musicians in New York’s Lower East Side in the earlier 1990s in the shadow of the HIV/AIDS epidemic.

SCP president Tina Brow said the cast is doing an amazing job with the rock musical’s songs during the rehearsal process.

“It’s a show that talks about people really coming into their own,” Brow said. “Making it out there, on their own, without parents, without anything and showing the reality of it. It’s not simple … it can be hard, it can be tough, and in the end when you have your friends that is all that matters.”

She said the show is more about the friendships and the relationships that they have and less about HIV/AIDS.

“AIDS is a part of it but it’s not the main part of it,” Brow said. “It’s all about friendships and what you truly believe in and fighting for that and just being there for one another.”

The show is has adult content, language and sexual content, Brow said. She said the show is not appropriate for children, and teens may attend only with a parent.

“I love the fact that it’s actually here at the playhouse,” Brow said. “It’s got this intimate feeling. The cast has become close, and I think that is really going to show. And then having the audience really right there with it I think is going to make the experience that much more personal and meaningful for them.”

Amy Bos, who plays Maureen, said her character is very flamboyant, self-centered and dramatic, and that challenge made her want to be in the show.

“I think it is a show that people can connect with,” Bos said. “It’s more of a modern, current age situation even though it was done 20 years ago. (Note: RENT opened on Broadway 16 years ago, in 1996.)

Rian McDonald plays Roger, a recovering drug addict whose girlfriend committed suicide a few months earlier and who hasn’t left his apartment since then. The other characters come to see him. His character resists falling in love with Mimi because he has AIDS and he knows his life expectancy is not that long. Then he finds out Mimi also has AIDS.

He said the show tackles issues that friends and relatives older than him may not have had to deal with in their lives.

“They didn’t have to go through the same type of things that these characters are going through,” McDonald said. “It kind of gives them a different perspective from that time period that they never had to deal with.”

Ensemble member Josh LaPeer said “Rent” is a show with a lot of meaning, and there aren’t many plays like it, so it is definitely worth the trip to Southgate to come see it.

“It’s not just about the music,” he said. “It’s about the story that it tells, and it’s about life. They lived a life, too, and things may be a little different but if they just accept it and take the time to take it in I think they’ll find some things that appeal to them.”

“Benny is the bad guy, the jerk,” Williams said. “He promised them that they could live in the apartment for free and now he’s taking back his word.”

Williams further explained that Benny was once poor and living with the characters in the apartment, but now he wants to improve the neighborhood and help everyone but he is going about it the wrong way.

“Benny is a misunderstood character and that’s why I identify with him,” Williams said. “He wants to remain loyal to his friends but… he does not want to disappoint his new set … so he’s conflicted.”

Williams, who has sung his entire life, in keeping with his family tradition, said this is his first theatrical role.

“The play is so good – it tells such a great story,” he said. “The theater company is so great… everyone is so nice it’s easy to just come in and we’re kind of like a little family here.”

“It’s so powerful and so moving that it touches any subject that you can find some kind of intrinsic meaning in,” he said. “It really just hits everyone’s heart. There is… no weak point in the show. It’s a very strong, heartfelt show… there is so much in it that everyone can get out of it that it’s kind of hard to miss.”

Orchestral music director Karlene Szekely said that musically the show has a little bit of everything: rock, gospel, ballads and even Jamaican music.

“There’s something for everyone—you can’t go wrong,” Szekely said. “The music is so powerful… we’re moving into a world where times are changing and we need people to realize that this is where we are going with the world, and I think this show really accentuates that.”

She said there are musical parallels with La boheme: Mimi’s “Light My Candle” song, as well as people fighting for the freedom to express their art.

“We have a varied array of talent, from beginners to people who have done this for years,” Szekely said. “Just to see everybody come together and that mesh of talent and that mesh of contribution – (it is) definitely a show to come see.”

Director Chris Rollet said people who are not familiar with the show will be surprised by how touching it is.

“It’s not a traditional musical, and it has great music in it I think,” Rollet said. “I think it’s a great show… everybody knows the show so well. We put it together in a short amount of time but I think everybody will be pleasantly surprised by how good it is.”

The Hilberry Theatre is at 4743 Cass Ave. at Hancock on the Wayne State campus in Detroit. For tickets or more information call 313-577-2972 or go to www.hilberry.com.

In a retelling of the classic story, each of the ensemble members take turns playing Udrich, the ugly duckling, who tries to find himself in the role of others before finally becoming a swan. Each ensemble member takes a turn as the title character as he tries to mirror each creature in his search for identity.

The play, which runs just under an hour, will spark the imagination of most children. After an initial slow start (and really, how interesting is a mother duck sitting on eggs?) the show picks up the pace, and the bigger-than-life personalities of the actors as animals and farm folk charms the house and captures the curiosity of the children in attendance.

The sound effects are produced off to the side of the stage so children in the audience can watch how they are done, adding an additional interesting layer to the play production experience.

The freestanding modular set facilitates the illusion of quick season changes. They also hold simple props, which the cast pluck from the scenery stands like camouflaged puzzle pieces.

The ensemble includes Michael Fisher of Garden City as Drake, a dog and a man, Assata Haki of Detroit as neighbor, turkey and hen and Sydney Machesky of Royal Oak as a sibling duck and a swan.

Aaron Westlake and Nancy Florkowski co-direct, with Regina Spain as the set and properties designer and Fred Florkowski as the technical designer.