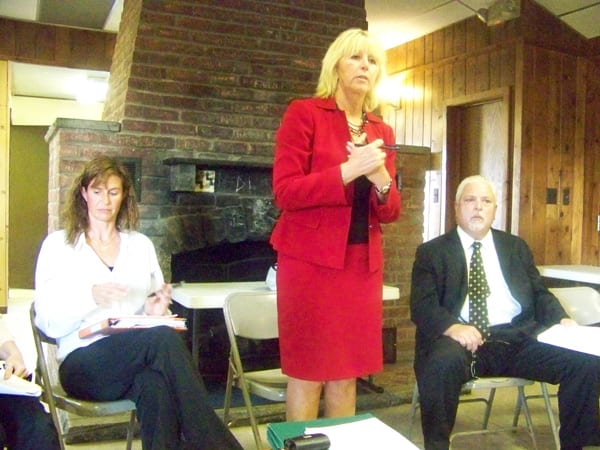 By SHERRI KOLADE
Times-Herald Newspapers
DEARBORN — The discussion to sink or swim the Hemlock Pool is a topic that leaves many passionate residents with very different opinions.

Those opinions were voiced at a meeting June 26 to discuss the option of reopening the local pool.

During the Hemlock Special Assessment District Public Education meeting at Hemlock Cabin, about 30 city officials and residents discussed the option to have the nearly 2,000 homeowners within a square mile of the pool pay about $60 to $70 a year for 10 years to reopen the pool.

Hemlock Pool and Whitmore-Bolles Pool were closed based on usage and the condition of the pool after the 2010 summer season in an attempt to bring municipal costs in line with available revenue, according to a city press release.

A west Dearborn group dubbed “Save Our Pools” created a petition campaign this year requesting residents vote on reopening the pool and be financially responsible for its redesign and modernization, costing about $1.3 million.

Hemlock Neighborhood Association President Alexander Shashko said Save Our Pools, with support from the Dearborn Recreation Department, approached him in March with the idea of getting signatures from people who were willing to assume responsibility of the pool.

“It took a couple of weeks and we were able to amass about 500 signatures,” Shashko said. About 100 signatures were needed.

After enough signatures were gathered, the City Council formed a Special Assessment District during its June 12 meeting. City Assessor Gary Evanko said the district is comprised of the the neighborhood bordered by Ford Road, Schaefer, Warren Avenue and Wyoming Avenue.

The Outdoor Pool Committee, a disbanded group originally formed last winter, looked at avenues to keep the pool open and decided to focus on Hemlock and the Special Assessment District was created.

During the meeting, Recreation & Parks Director Greg Orner said residents within those boundaries will have free access to the pool, and the people who live outside the district would have to purchase pool tags.

Shashko said in approximately the second or third week of July, Special Assessment District homeowners will receive a ballot in the mail with an option to accept or reject the proposal of funding the design, construction and operation of Hemlock Pool. The plan includes a new L-shaped pool for up to 200 to 225 people and a new bath house at an estimated cost of $1.3 million.

City Attorney Debra Walling said the project will go out for bids if the vote is approved.

“It hasn’t been bid out yet, that is why the $1.3 million is an approximate cost,” Walling said.

If the vote passes to approve the Hemlock Pool, the City Council still has the final authority to decide what they want to do with the pool, Shashko said.

“They can review it, add to it, subtract to it or kill it if they feel they dont like something about it,” Shashko said. “And they might have another meeting after that.”

If the vote fails, the next step is to bulldoze the pool with money set aside from the city budget.

Several attendees of the meeting discussed their objections to the pool and ideas for cost-cutting methods. Others reminisced about a time when the pool was a popular hangout spot.

Stephen Dobkowski, who has lived in Dearborn for 70 years and swam in the pool when it opened, said during the meeting he wants the Hemlock Pool to be opened.

“It was a really great place to cool off,” Dobkowski said of swimming in the early 1950s. “And it was always 10 to 15 kids trying to get in because it was always ovecrowded.”

Nowadays, Dobkowski said the pool seems like a shadow of its former self and if the pool goes, it could be downhill for the city from there.

“People don’t know how close to the edge we are at where we could become the next Detroit,” Dobkowski said. “You lose a little bit here, a little bit there and all of a sudden you turn into nothing.”