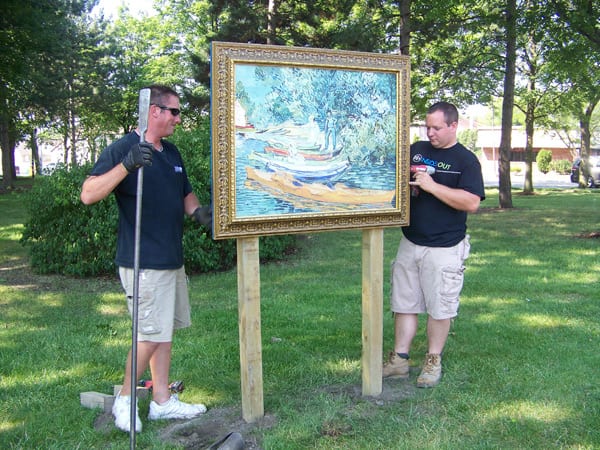 By SHERRI KOLADE
Times-Herald Newspapers
DEARBORN — Art is alive in Dearborn and EmmaJean Woodyard wants the public to know about it.

As the executive director of the Dearborn Community Fund, Woodyard is inviting the community to celebrate eight reproductions of famous paintings from the DIA collection, 12 sculptures from Dearborn’s 2012-2013 Midwest Sculpture Initiative and two permanent sculptures designed and fabricated by the Pockets Of Perception Student Design Team
with a launch party from 6 p.m. to 7:30 p.m. July 17 at the Henry Ford Centennial Library, 16301 Michigan Ave.

Woodyard said the art can be viewed around the city and is used as a medium to promote culture and interactivity among community members.

Woodyard also said she wants the community to know how much art is available to the public.

“It speaks to the values of the community,” Woodyard said in a press release.

On July 2, the DIA installed eight sculptures on or near Michigan Avenue. One sculptures, “Konigsee,” is at Starbucks, 22155 Michigan Ave. Another, “Mosquito Nets,” is at the the Henry Ford Centennial Library.

Through the Midwest Sculpture Initiative’s fourth Annual City of Dearborn Outdoor Sculpture Exhibition, 12 exhibits have been on display since April and will stay up until April 2013, according to the press release.

Midwest Sculpture Initiative Owner and Founder Ken Thompson said on his website public art has been with humanity beginning with prehistoric man and evolving since then.

“By the 1980s, many cities and states were forming public art committees and sponsoring sculpture and mural competitions to engage the artists with their communities,” Thompson said.

Fast forward to today, where art improves the quality of life, Thompson said.

“The exhibits serve to increase awareness of the visual arts, assert that a community is forward thinking and energetic, improve the quality of life, dress-up the urban landscape and provide artists with a venue to showcase and sell the work,” Thompson said, “not to mention the economic impact, which can be significant.”

One of the sculptures, “Large Graceful Dancers,” is outside the Michael A. Guido Theater.

Sculpture brochures will be available to the public during the launch. The Royal Garden Trio, heard playing for the DIA commercials, will also be featured at the event.

For more information about the launch contact the Dearborn Community Fund office at 313-943-5478.