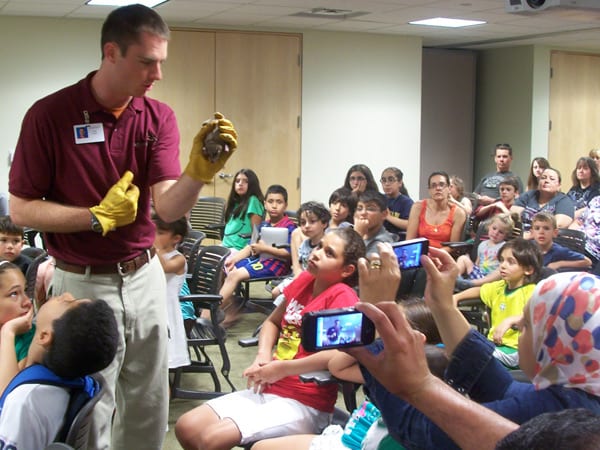 By SHERRI KOLADE
Times-Herald Newspapers
HEIGHTS — Inaam Makki sat in her chair with her hands on her lap waiting for her favorite animal to poke out its tiny, furry face and greet her.

During a July 2 Caroline Kennedy Library event called “Bats of the World,” about 80 people gathered to see several bats up close and personal, learning about their habitats, favorite foods and more.

“They are my favorite animal,” Makki said with a smile. “My favorite one is the big brown/black one. Because it is small, the ears are bigger than its head and it is my favorite color, brown. And my most favorite part of the bat is it is so, so adorable.”

Makki said she has never been scared of bats and she would advise others to not be scared either.

“They are just bats,” she said with a shrug. “They are not dangerous animals.”

The Bloomfield Hills-based Organization for Bat Conservation is behind the bat program. Presenter Chad Geurts walked around during the event describing the big and little bats he held in his hand or in a glass box, with almost every child “oohing” and “aahing” in the room trying to get a closer peek.

“Its nose is described as kind of looking like a rhinoserous and that piece of skin (on his nose) is almost like a triangle,” Geurts said. “And that is where he gets his name.”

He also said the bat is a micro bat and uses echolocation, a system bats use to navigate through the night when hunting prey.

“Even when you listen to him you still can’t hear echolocation,” Geurts said. “You see that he is looking around, he can see you.”

“We like to support our communities,” Ramzieh Makki said. “My kids are very into science and animals so they enjoyed it. They love it.”

Inkster resident and Caroline Kennedy Library volunteer Alvin Gibbs said he didn’t really know a lot about bats before he attended the event.

“I like bats because they are a different type of breed of animals,” Gibbs said. “I didn’t know what bats eat, but I learned.”